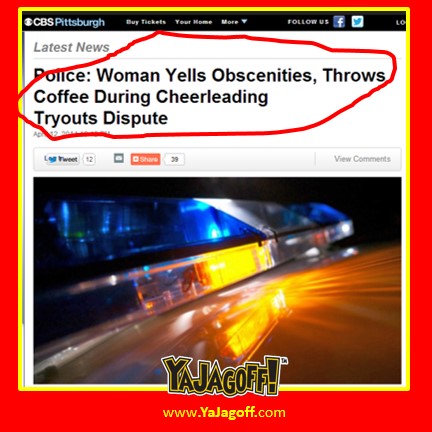 A woman is facing charges after she got into a heated fight with a parent during cheerleading tryouts at a Beaver County high school, and then poured coffee on the person who tried to break up the dispute.

22 year old woman, Kailyn Boring, gets in confrontation with another woman about who made the squad, who didn’t, blah, blah, blah, blah and other VERY critical life-altering things that go along with cheerleading.

Cheerleading squad adviser intervenes to stop the nastiness, gets coffee dumped on her (ALLEGEDLY) by Kailyn Boring

Welllllll, nice work showing the kids on how to handle themselves in life AND in cheerleading, Kailyn.  These kinds of incidents solve EVERYTHING in the world after high school… especially the dumping-coffee-on-someone skill.  In the work place it is actually very underrated.

Kailyn,  not sure where this ALLEGED incident is going to lead but thanks for demonstrating to the kids how to take disappointment with dignity!  Our thoughts, get a cheesy lawyer and say that the other lady said, “Let’s talk about this over coffee.  The coffee is on me,” and then you can testify that you THOUGHT she said, “Let’s talk about this over coffee.  DUMP THAT COFFEE on me!” Better yet, give the excuse that the warning on the coffee cup only says, “CAUTION: Hot Beverage” but does NOT clearly state to not throw it on someone.

Wait.. don’t do that.  That will just continue to embarrass the rest of us Pittsburghers even further.

All that I know is, after reading this story, once again, I called my parents (because they don’t know how to text) and thanked them for beating my ever-loving ARSE occasionally with a paddle.  And by the way, Kailyn, it would appear is if any future as a barista at Starbucks seems a bit in jeopardy, Ya Jagoff!

NOTE: No matter WHAT happens at any upcoming hearings, you’re in need of some SERIOUS “Jagoff Rehab.”

Please refer yourself to BOTH of these Pittsburgh websites: Secret Agent L and Dignity And Respect