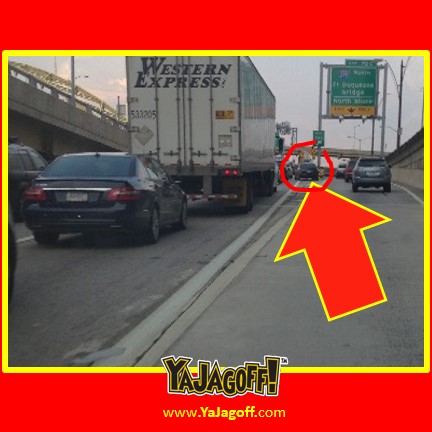 This blog has been up and running since January, 2011.  And, while what is captured in the photo above happens on a regular basis, I have not been able to capture one with a camera…and can be somewhat of an enigma… just like a Sasquatch.

But….the hunt is over!

Yesterday, as I was driving through the “bath tub” area, I saw this guy….by using the right lane, he passed all of the traffic in the center and left lanes approaching the Fort Pitt Bridge. And just as he got to the split, BOOM! …cuts over into traffic with a My-Time-Is-More-Important-Than-You move!

This spot is yet another one of those spots in Western Pa. that, if a cop was placed there every day, we would be able to cover whatever City, County or Port Authority debt there is.. .by issuing Jagoff fines to these drivers… OR…even worse…making them sit in traffic and listen to Barney The Dinosaur cassette tapes!

Hey Sasquatch, you are not as rare as the few pictures of you doing what you’re doing.  You made my day finally getting capturing this on a photo.  I know that there are more of you lurking out there.  The only thing I am disappointed in is, I had to take the right lane.

I would have LOVED to follow you up to the bridge and capture you in your real habitat… driving in traffic on the bridge…more than likely… stopping in your lane, with your turn signal on, blocking everyone else, until you can get to where YOU wanna go, YA JAGOFF!!!