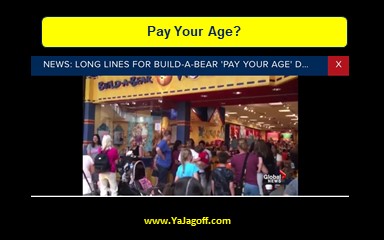 The headline read something like pandemonium at Build-A-Bear. Pandemonium. What could cause such a thing? Did the stuffing station malfunction or the bear heart manufacturing area go on the fritz?  Nope, neither.  It was pay your age day and it didn’t even last an entire day.  In some cities the marketing gimmick lasted a half day and others were shut down within three hours.

There are so many problems with paying your age.  Did adults pretend to be younger to partake in this silly promotion?  Like were grown men and women telling mall cops that they forgot their licenses for proof of birth?  Or was there a surge in fake IDs to get into the stuffed animal place on July 12?  Either way this is ridiculous.

Apparently, people were waiting in lines for hours causing angst and leading to brawls.  I mean, Amazon was birthed in the nick of time during holiday season helping to eliminate the Black Friday tussles, and now we have this?  The price range began at $1 and was maxed at $29.  So, it is not like the 42 year-old hockey mom with a not so flat tummy, baby birthing hips, and who just spotted crows feet had to fake her ID or fudge her age.  Nope.  She had to wait in a three-hour line for a stuffed bear for $29—was this to pretend she was 29 on pay your age day at Build-A-Bear?

I guess the question is what was worse, the people who thought paying your age was a good idea or the hard-up for something stuffed patron who waited 3 hours…and in some cases were given a voucher for $15 since some supplies were wiped out during the wait.  A $15 voucher?  Thanks for the $5 an hour stipend for wishing I was younger and waiting in line, YaJagoff!.  #NoMOrePayYOurAge