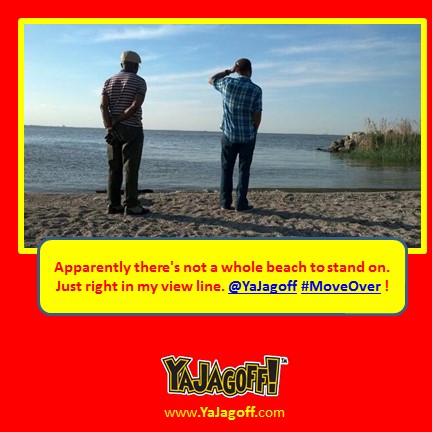 So ya sit down at the wide open beach, ready to relax and gaze at the view.  This is, of course, after you walked to this spot, maybe made a bunch of circles like like a dog does before he settles to make sure the spot is perfect, made sure it was a perfect view, put your stuff down, and maybe even swore at your towel or blanket a few times as you tried to get it to flatten in the wind.

Then, despite the fact that the beach is thousands of feet long, two people stroll along and stop right in front of you for THEIR gander at the horizon.

“Oh look at that out there.. hmmmm how nice!  Glad that we stopped here because the view probably isn’t nearly as good 6-feet further down the beach!”

Now, before I go any further, let me tell ya why this post is sooooooooooooo important.

A few months ago, I was hanging out in a Toledo area restaurant.  There were these two guys hanging out at the bar trying to pull off every stupid come-on line known to men (and used only by Jagoffs) on the female bartender.  For an hour, I tweeted all of the stuff these Willly Lowman’s were spewing under the hashtag, #TwoObnoxiousGuysABar.  When I was done, I let the bartender know that I had been tweeting.  The next day I wrote a blog post about what happened.   She became a twitter follower and, this weekend, she became an Honorary Jagoff Catcher!  She took this beach photo.

Jagoff catching is spreading all over.  Welcome aboard Toledo!

So back to the to two Beach “Bums”… LITERALLY…. in the picture, can you not find some other place to stand other that directly in the line of view?  Yeah, go ahead, put your hand up to your forehead! It’s pretty damned nice out there! And far too.  And, guess what, the people behind you would like to experience that damned nice view too as opposed to your ARSES and the backs of your Izod shirts, Ya Jagoffs!

Special thanks to @apelofyoureye in the Toledo area for being our Honorary Jagoff Catcher!