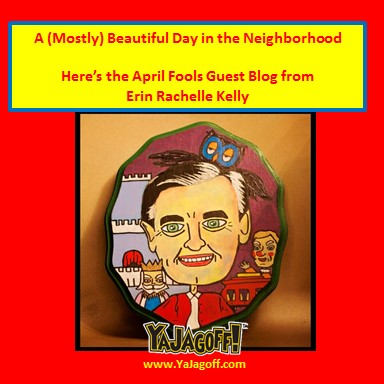 You can see my post over on Douglas Derda’s “My Blog n’at.”  Hint: I bought a “3D Printer”

Fred pulled back the kitchen curtains and took in the typical Pittsburgh sky: sunlight struggling to be seen through clouds in varying states of precipitation.

“It’s another beautiful day in Pittsburgh,” he smiled. A note clinging to his fridge against the weight of a Steelers magnet reminded him that he needed to buy more pierogis and pop, but first he was having breakfast with his best friend, Mr. McFeely.

Mr. McFeely was already waiting at a table when Fred arrived at Pamela’s later that morning.

“Fred, we picked a bad day to come here,” he spat sourly. “The place is full of kinderdicks!”

A cursory scan of the breakfast hot spot taught Fred that there were indeed many small children communicating their feelings in the cacophonic volume of basic banshees.

“Mr. McFeely, these children are the future Heinz laborers! The next Sophie Masloffs and Michael Keatons! They deserve to be here, eating potatoes lyonnaise, just as much as you and I.” Fred beamed happily, tucking a napkin into his cardigan.

“I just really love everyone in my neighborhood,” Fred modestly waved off the compliment.

On the way to Giant Eagle later that afternoon, Fred’s car hit a pothole the size of Ben Roesthlisberger’s ego, splashing his Schneider’s iced tea into his lap. Fred shook his head and chuckled. “Maybe I should have taken the trolley!”

In Giant Eagle, Fred considered buying a pound of Isaly’s chipped ham but remembered he had 9 pounds of it in his freezer already.

“Will this be all for today?” the young, disinterested cashier asked Fred at the check-out.

“Yes dear, just came here for some pierogis and pop,” Fred answered, his avuncular smile causing crinkles to spread from his eyes.

“It’s soda,” she corrected him, making it clear she was one of those endearing transplants, here to attend college while constantly disputing the vernacular.

Fred took the bag from her outstretched hand, politely wishing her well while laughing softly to himself. He knew she would be calling it pop in no time.

When Fred arrived home that evening after a full day of tooling around town, some of the neighborhood children were playing a rousing game of Release. The playing field had spilled into his yard, but Fred didn’t mind; children were his favorite types of people. Especially Pittsburgh children. Fred paused outside of his front door, smiling lazily at the sounds of prepubescent caterwauls and urban swears while casually sliding the gum band off of the stack of mail that arrived that day. His eyes had just fallen on an ad in the Pennysaver for the Immaculate Heart of Mary fish fry when his periphery caught a flash of something that made him involuntarily dry-heave.

It was a putrid color, the wash of ear wax.

The chroma of Cheetos’d fingertips.

The stain of Snooki’s skin after a summer at the Jersey Shore.

Fred felt the color drain from his face. His heart began thrumming against his ribcage and something of an unfamiliar feeling began rising up from his gut. It was a feeling he felt only thrice in his life:

The orange flash was a Philadelphia Flyers jersey. On a child.

Shaking the Pennysaver—now rolled-up into a Flyers-fan beating apparatus—into the air, Fred hollered, “Get off my lawn, ya jagoff!”

A Body of One’s Own

In Pursuit of Happiness

In Pursuit of Simple