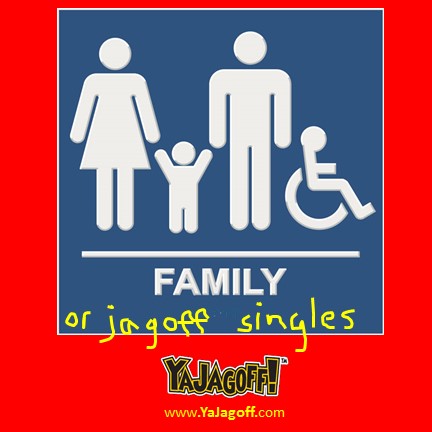 Last day of my Pittsburgh binge at  Joe’s Rusty Nail, Jack’s Bar and the Stroll Inn celebrating the Pittsburgh Magazine, Best of 2014 recognition for ” Best Snarky Nod Toward Local Behavior ”

Sean of Sean’s Ramblings, take us into the weekend!

Traveling with kids is difficult.

A 12-pound infant needs a car seat, stroller, formula, bottles, diapers, wipes and multiple changes of clothes for when he/she spits up on the current outfit. All of this stuff is significantly heavier than the baby itself. Flying with two kids, particularly with both in diapers, brings an even greater degree of difficulty. You just try to get to and from your destination without meltdowns and with as little disruption to the other passengers as possible.

Inevitably, you will need several diaper changes during the trip. Just pray that you don’t have to do this on the airplane! Fortunately, most (if not all) airports have family restrooms or at least changing stations in the restrooms. Family restrooms make it much easier for diaper changes and for when you need to go potty yourself without worrying about leaving your kids unattended. However, some individuals decide that they would rather have the privacy of their own restroom even if they don’t have any kids with them.

I was at an airport (not Pittsburgh) recently with family restrooms but no changing stations in the regular restroom. Unless you want to change a diaper in public (and no one wants that especially for the disposal aspect), the only place to comfortably change the diaper was in the family restroom. I waited more than 10 minutes for a family restroom before finally giving up and calling my wife for help. In case you’re wondering, I tried the door several times and even knocked once asking if everything was okay. I got no response. When I switched with my wife, she saw a woman exiting the family restroom alone.

To this woman (and to anyone else using a family restroom without a family at an airport), suck it up and use the “regular” bathroom like everyone else, Ya Jagoff!