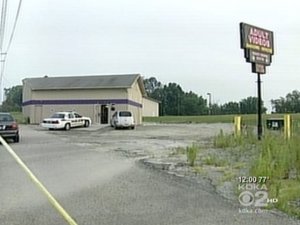 So two masked men broke into the Adult Book Store in Murrysville, PA.  They stolel some money and they handcuffed the clerk to a computer stand (at least they had the class to do it it with the Furry Handcuffs from the store).  KDKA Radio had a report of one of the police officers stating that the robbers also took a bunch of “toys” as well as money from the safe!!

Haaa, haaa!  I always say, it’s never about Step 1 in life its AWLAYS about Step 2.  So in THIS case, step 1 “It seems really funny to steal a horde of sex toys.”  However, Step 2 might be, “What in the @#$# are we gonna DO with these things now that we have’em?”   Here a some ideas the robbers may be thinking:

1)  Go celebrate their “job” at the local bar by proudly throwing their “rewards”  all over the bar with  in front of “the boys?”

2)  Sell them at a local Flea Market?  People there might not be familiar with the news.

3)  Have a Tupperware Party and feature these things as “One-time Only” items?

4)  Sell them as a new way to mix your kids’ Nestle’s Quick into their milk?  (batteries not included)

Here’s my other question,  I wonder where they hid them as they made their GET-A-WAY!!

Well, let’s give these guys the benefit of the doubt.  Most robbers steal out of desparation , i.e., they steal money because they are destitute for cash, etc.  Maybe these guys are elderly polygamist males with erectile dysfunction and need a little “bull-pen support” at home!

Hey boys, not sure what you’re gonna do now but, IF I WERE YOU, I would QUICKLY make up some OTHER story on what crime you committed for when you get to jail.  Otherwise HARD TIME is gonna have a tough definition in the slammer once your cellmate realize what you stole, YA JAGOFFS!

MEDIA NOTE:   We saw the visual support for this news story, regarding WHAT TOYS WERE STOLEN, as a PERFECT opportunity for TV reporters to utilize those infamous “TV reporter how much snow did we get overnight rulers” as they described the stolen items!!  Unfortunately no TV reporter did.  News visual FAIL!

Thanks to Honorary Jagoff Catcher, Richard D from our Blog Email List for “the tip.”