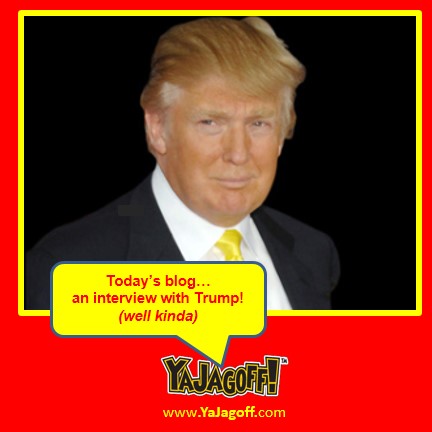 Here’s the transcript of said interview as far as you know.

ME: Well, um, (throat clear), good.  I saw that you were interviewed by George Stephanopoulos one time.  He and others road you pretty hard about the whole Obama birth certificate issue.

TRUMP: Hey, so he may think he won that, but campaigning is not a sprint, it’s a marathon, did you ever see the story of the “Tortoise and the Hare?”

ME: Nothing, nothing. Let’s move on.  I saw the photos of your newly redecorated office.  It looks very lavish.  If you would ever run for President and win, would you want to redecorate the White House if you move into it?

TRUMP: Hey, I buy lavish stuff with MY money, not the government’s.  Actually, quite frankly, with how much taxes I pay, most of the government’s money IS mine.  But I won’t be like that.  For the White House, I just want  the carpet to match the drapes!

ME: Oh, I almost forgot.  If you WERE President, what would you do with Vladimir Putin?

TRUMP: I don’t care about him.  We’d take him out easily.  We’re currently the laughing stock of the world in my opinion.  This is just business.  I would offer him as spot on the NBC Apprentice Show.  I’d put him in a room with Gary Busey.  He’ll flip his wig!.

In this article: Interview With Donald Trump, Jagoff, Jagoffs, Pittsburgh, Pittsburghese, Ya Jagoff