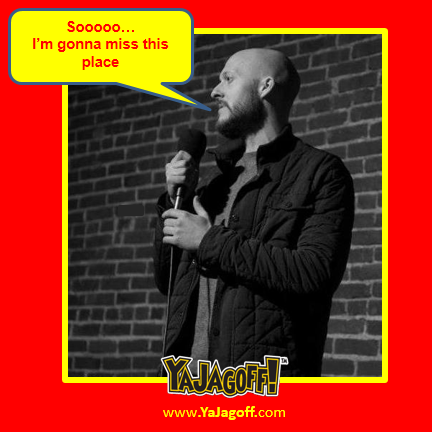 OK.. I have one more day here in Hawaii…..pics on Facebook and Twitter but will post some here next week.  In the meantime, here’s today’s Guest Blog post from Pittsburgh comedian, now gone, Isaac Kozell.

It’s been three months since I left your loving arms and settled into the warm embrace of my new home in Louisiana. There’s so much to love about the south. For instance, as I write this, you’re struggling to crack the 45 degree mark, as thick clouds cast a dismal, grey filter over your three rivers. Meanwhile, I’m sitting outside in my boxers, applying sunscreen and sipping mint juleps.

Despite the many charms of Southern living, there are definitely things I miss about the North, like, the way that people greet you. In Pittsburgh – hell, in almost every other part of the country – you can walk into any coffee shop, gas station, or adult bookstore and get a friendly, “Hey, how you doin’?” But in the South, the common greeting is, “Are you alright?” delivered in an unnerving tone that suggests that you just got a nosebleed and haven’t quite noticed it yet. Southern hospitality this is not.

The first few times I heard, “Are you alright?” I thought I’d done something wrong, like, absentmindedly left the house without my pants on, or, walked into a public establishment holding hands with a black girl. But after realizing that I wasn’t doing anything physically to merit such a question, I began to wonder if the locals were picking up on something else. Perhaps there’s some kind of Southern intuition, a Confederate sixth sense, that I’m unaware of.

All Southerners are genetically gifted with the ability to track wild game using scent alone. It’s a scientific truth. Their babies are born with this talent. Visit any pediatrician’s office and you’ll see a child development chart on the wall. The first three stages are crawling, walking, and tracking pheasant. Verbal communication and reading aren’t expected until much later in life, if at all.

I believe that Southerners have begun to evolve their scent-detection skills to a level in which they can learn personal details about other humans. If this is true, one good whiff is all it would take to provide them with an inside peek into a person’s inner fears, subconscious turmoil, and darkest secrets. It’s frightening to think that any Southerner positioned downwind of me would instinctively know that I spent a significant portion of my early teens trying on my mother’s lingerie. If that ever got out, my reputation would be ruined.

I guess what I’m trying to say is, sometimes I really miss you…Ya Jagoffs!”