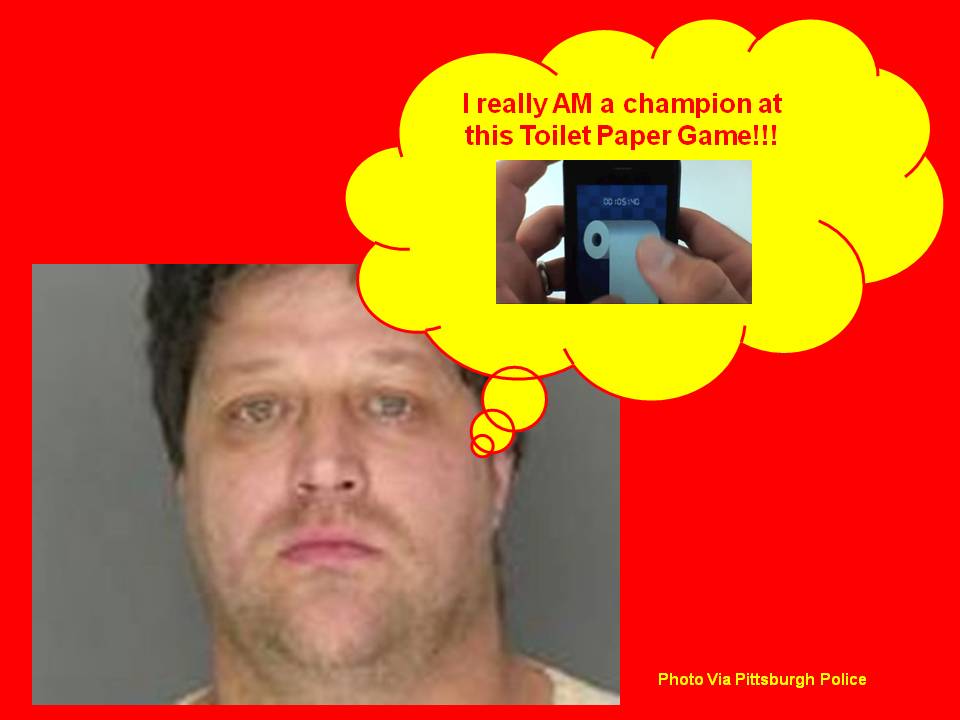 So we were VERY confident what today’s post was going to be when we saw WPXI’s Cara Sapida’s Facebook note, yesterday morning:

Man accused of surfing pornographic websites in front of kids at a Carnegie Library was just arraigned.  He claims he was playing with his phone.

Oh Lord!! Whadda setup?  Does she have to make it THIS easy??  (If you wait, you can hear the punchlines and the follow-up snare drum and cymbal.)

THEN, outta nowhere, WPXI breaks a story that a guy videotaped a UFO in Fayette County!  (Make your OWN train emergency-stop SCREEEEECHING sound out loud RIGHT NOW!)  What were we to do???

So Brookline’s Edward Richards wants you to believe that he was in the local library, on the public computers, LEARNING THE INTERNET, sitting near some kids and ACCIDENTALLY came across some “naughties” on the computer and, AT THE EXACT SAME TIME, apparently he had to make an extensive search, in his pants, for his phone.  Some people reported him, kids were nervous, the situation was addressed, he headed to a local bar and he eventually got picked up by the police.

This is where he sets up the AWESOME Cara Sapida to be the PERFECT straight man by giving his excuse that he was “trying find a website about teen attitudes” and “had his hand in his pocket playing with his phone.”

To help, cuz we’re like that, we suggest that Ed say he was trying to play the “Toilet Paper Drag” game on his smart phone!  (HINT to our Commodore-64-5-and-a-quarter-inch-disc buddy named Eddie: This alibi won’t work if you have an older cell phone.)

Or, maybe Eddie can say that his TV at home is broken and he just has a nasty habit, when relaxing and watching movies at home, of putting one hand in his pants and leaving the other one out to take an occasional scoop of dry roasted peanuts! (If they didn’t find a bowl of peanuts at the library then this is ALSO bad for dear Eddie.)

Either way, stay steady Eddie.  Things aren’t looking so good for that ingenious alibi.  Remember this, when you say, ” I was only playing with my phone,” WE SAY, “everyone has their own pet name for it.”  Another thing, when you get to jail and hear a phone ring, DON’T react when your inmate buddy hells, “GRAB THE PHONE,  YA JAGOFF!!!!”

To see the REALLY funny stuff, go to Cara Sapida’s Facebook page and scroll until you see this story!

Thanks to the MANY Honorary Jagoff Catchers who emailed, shared, tweeted this story to us including: Tad Askew, Mike Hancock (real name) and Jay Howell!

If you haven’t ordered one of our “Don’t Be A Jagoff” T-shirts yet, please click the pic below.

We sell them to raise money for Breast Cancer Research!