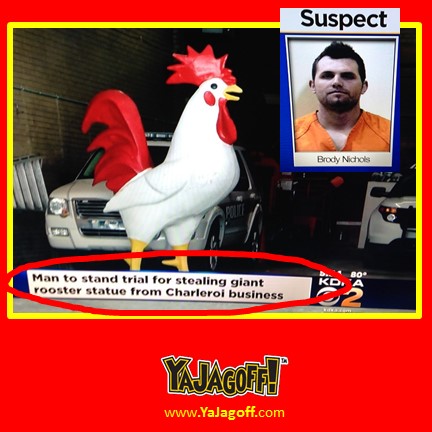 I didn’t go the easy joke route here.  I stayed with the word “rooster.”

Back in May, Brody Nichols ALLEGEDLY decided it was a good idea to steal a 12′ foot rooster from Tim’s Secret Treasures in Charleroi, PA by loading the thing into the back of his pick-up truck in the middle of the night.  This week he was finally arraigned.

Now one might say, “Hey, they’re probably doing it because of the current plastic rooster exchange rate!”  Yeah, we get that but, our question is HOW…. as in how in theeeeeeee hell does someone steal a 12-foot roster and, maybe even more importantly, WHY?

So many parodies, so little blogging space. (Hey, buddy, pssssst, over here, pssssst, need a 12-foot roster?  Only fie-dolla!”)

But I’m really stuck on this question.  Once it was in the news, what in THEEEEEEEE HELL were you going to do with a 12-foot plastic rooster?   The whole thing behind stealing something is concealing the booty once it’s in your possession until the dust settles.  Something tells me you were going to have to steal a backhoe next to bury the rooster next to your favorite tree out in a Washington County field.  Or was your plan to simply hide it under a pile of KFC buckets?

All I have to say is, good luck explaining this to your cellmate in prison, who, after he tells you he killed or maimed some people, you’ll have to respond, “Oh yeah… well step off ‘cuz I stole a 12-foot plastic rooster Mutha &@^#$@!”  And by the way, just a quick note, not that I’ve ever been but, I have watched a lot of HBO…when telling that story to your cellmate, I’d be sure to stick with the phrase 12-foot ROOSTER.  Good luck in jail, Ya Jagoff!