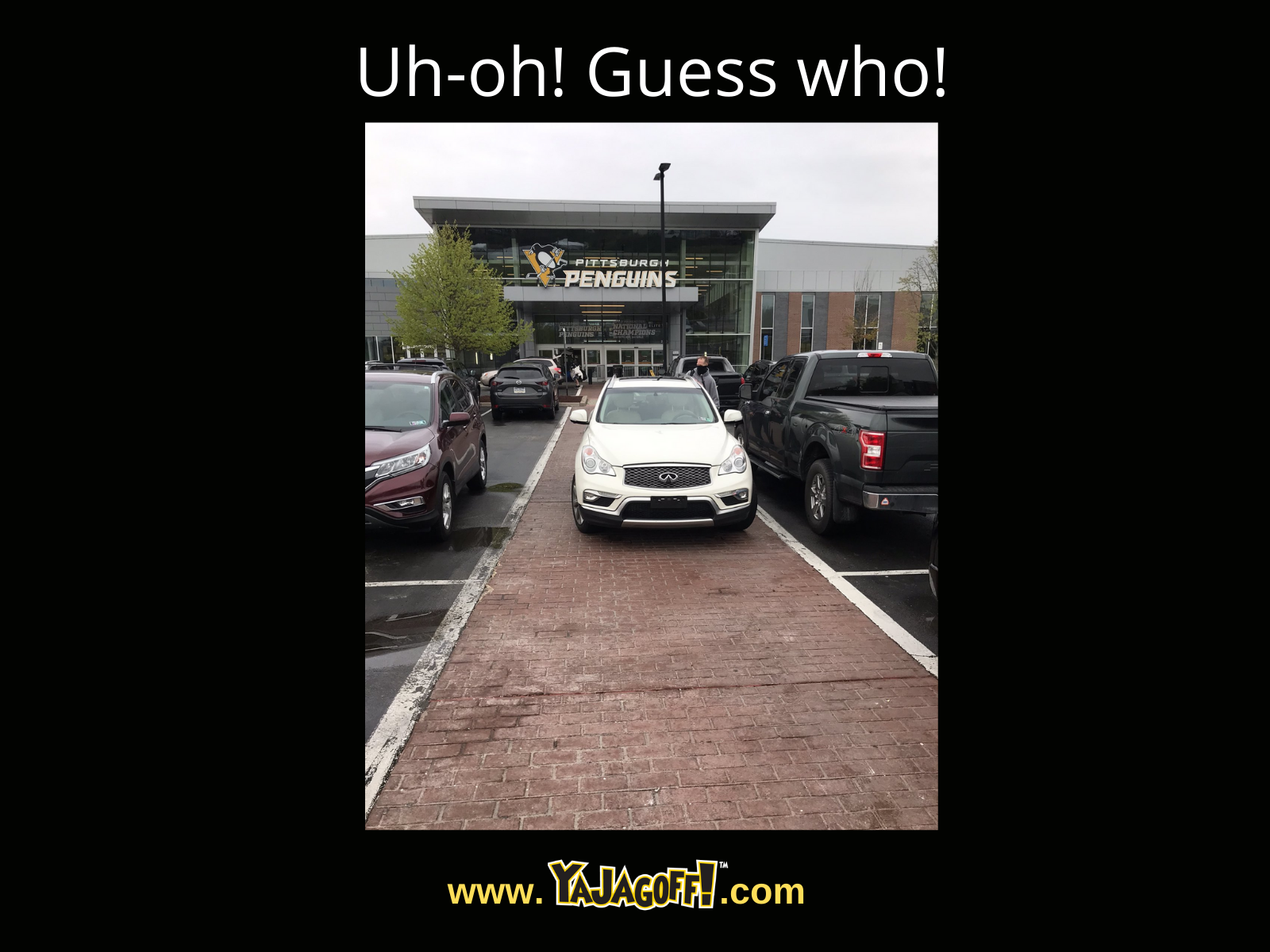 A few times over the years of this blog, we have had to call out a few of our own family, family pets and sometimes even ourselves.  Today might be the first time someone has turned us in TO OURSELVES!

This is a major league #PeterParkers pic taken early Sunday morning at the Pens’ UPMC facility. It clearly shows that I parked like a … well.. you know… YIKES!  To my defense, I was running super late  (as usual). I pulled into the parking lot on 2 wheels, saw a space in between, hmmmm…. 2 vehicles and boom! There I was, nice and straight.  I jumped outta my car, grabbed my equipment bag and sticks, and dashed toward the door as if I was heading in to play wing with Sid for the next 3 months.

I wasn’t home long before I saw the tweet below.

Look at this @YaJagoff ! pic.twitter.com/z0RbltSG9R

To my defense, I was running late because, when I was leaving my house I had to help an elderly lady cross the street by carrying her groceries, then ,as I was getting in my car, my neighbor asked for a jump start on his car so that he could get to church and, then, as I started driving, I felt bad for one of those  intersection-flower vendors so I stopped and dug out $5 worth of change from under my car seats to by 3 flowers, and as I was getting on I-279, I didn’t realize that there was a Union Avenue shut-down  so, I got outta my car to get rid of some frustration by beating the Road Closed signs with one of my hockey sticks only to come across an anger management counselor, who was also surprised at the road closure, who then helped calm me down by envisioning a Pittsburgh skyline view with a rainbow and then sent me on my way singing a Mr. Rogers song. Then, as I was finally on I-79 North, I got behind a dump truck, that was behind a Toyota Prius, that was behind a Subaru Forrester that was behind a tractor trailer with an oversized load that was following an older model Ponatiac Bonneville that had a 50-year member West Penn Triple A sticker on the bumper.  So… I was a little unfocused when I pulled in!

But no excuses!  (Looking in the mirror for this one but not in one of those weird naked shoulder Instagram pics kind of ways, and talking to myself) Hey, there, you driving the wanna-be SUV,  ya parked on the walkway which is clearly delineated by the bricks while there were more than 100 other parking spots! Howzabout getting your head and your hockey sticks outta your @$$ and paying attention when you park, Ya Jagoff!!

Credit to @RileyDogg66 on Twitter for being today’s Jagoff Catcher!