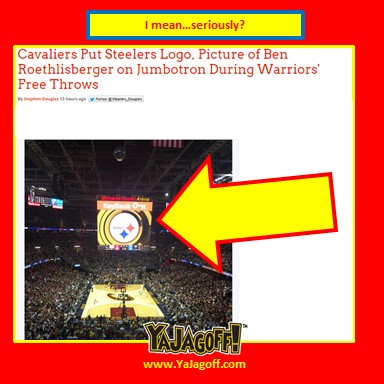 The other night on Facebook I fully admitted that, for some reason, I caught myself watching.. and enjoying.. the Cavs NBA Finals game against the Golden State Warriors.  The Cleveland fans were screaming their heads off.  LeBron was looking like some crazed madman on a mission and, in the meantime, there was no hockey to watch.  So there I was.

Some people fully admitted that they they were along with me and most said, get to a hospital right away indicating I had some kind of serious disease.  Perhaps, Cleveland-itis which is an inflammation of my thoughts about Cleveland.

But then… they did it!  There I was trying to be the helpful neighbor, cheering on the Cavs so that the Cleveland folks could finally be thrown a bone. And then they go an use Steelers stuff to get the crowd to boo.

I get it!  Good call. Ya gotta do what ya gotta do.

So then.. don’t complain during next year’s NFL season when the Brown’s go to kick a field goal that, what comes up on the jumbotron, is a picture of the Browns team and administrators NOT holding and NFL Lombardi Trophy and, the noise in the stadium becomes more deafening than a Patriots home game crowd sound pipe-in as the Pittsburgh Steelers fans laugh out loud hysterically, Ya Jagoffs!