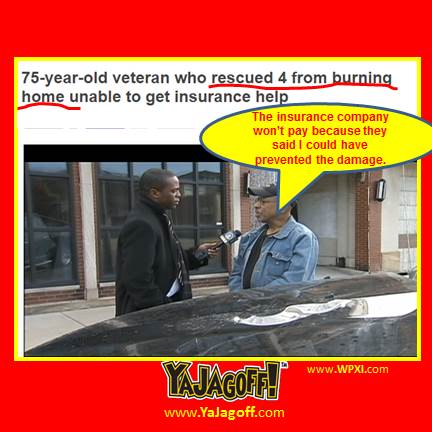 This kind of stuff makes me crazy.

Good person, does good work, actually saves a life or two aaaaaaaaand…..gets thrown to the wolves.

Emerson Andrews said he used his own truck to pull those people from the house fire in New Brighton, but now his insurance company won’t help pay for the damage done during the rescue.

“The truck went up on the porch…, got out behind and scooted it up a few feet,” Andrews said.

A noticeable dent on the hood will cost about $2,500 to repair.

Rewind and review: Emerson saw people trying to escape the second floor of a burning house.  He pulled his pick up truck up to the burning building so that the people good jump safely to his truck hood.

And it did!  A $2500 dent that, instead of his insurance company paying for the repairs as some kind of reward and publishing his picture in their old boring newsletter or whatever they have, or tweeting a “Thank you” to the guy that probably would have been re-tweeted about 5 bajillion times, they chose to tell Emerson that they couldn’t pay for the damage.

Even more cool, Emerson chose not to name and publicly shame the insurance company, taking it in stride.

Clearly, Emerson’s insurance company are group of Jagoffs.  There’s always a way around the rules, especially when someone, um, let’s see, does something basic like SAVES PEOPLE FROM A FREAKIN’ FIRE!!

Go HERE to DONATE and please send this to your friends so that we can show Emerson that Pittsburghers, he didn’t leave those people hanging from a window of a burning house, and WE will not leave HIM hanging like his insurance company did.

BLOG UPDATE 16:39: As per Brandon Hudson, WPXI, no donations are necessary. A local garage has offered to assist Emerson with his truck. As soon as I get the name of the place, I will post it for sure.

Thanks to Brandon Hudson, WPXI for bringing this story to everyone’s attention.