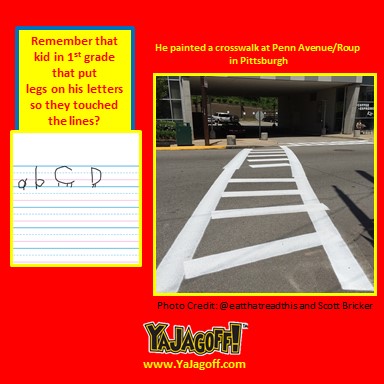 Yeah so…  this story started out that it may be the artistry of a local person, who wanted a city crosswalk and possibly became impatient so painted their own but lacked tools such as their protractor and t-square.

Buuuut nope!  See the excerpt below from  the EAT THAT, READ THIS daily email.

… but, as it turns out, this reimagining of the commonly-held concept of a crosswalk was indeed created by the department of public works…

So, not only does this crosswalk look like hell, it was purposefully put there and someone deliberately walked away from it saying, “Hmmmm.. that’s acceptable work.”

Hey crosswalk dudes and dudettes, this really could have been avoided if the painter was watching what he was doing and once he/she saw the first line go awry, he could have radioed to the project supervisor that a line went crooked, that project supervisor could have finished his cigarette, walked over to the water cooler, grabbed a little white-cone cup, filled it 3 times with water, then radioed to the SLOW/STOP sign-holder, who would have let 27 more cars through, then turned their sign to STOP, then walked over to the cone-placer guy so that he could re-arrange the cones if necessary, and asked, “How about those Pirates?” and then after they talked about McCutcheon’s recent batting average, walked over, signaled to the painter guy that he was going to have to take a line-painting-mulligan, took two last drags on his cigarette, threw it to the ground, stamped on it with his steel-toed boot with a twist, then exhaled a chest full of smoke, walked over, re-calibrated the line painting equipment and the painter’s eye glasses and had him start over.

But then again, who am I to judge? Please don’t accept any promotions to the Bridge Design Department, Ya Jagoffs!

If you’re not following the EAT THAT, READ THIS daily email yet, get on that.

Thanks much to Adam Shuck, creator/writer of the EAT THAT, READ THIS daily email and Scott Bricker for being Honorary Jagoff Catchers.