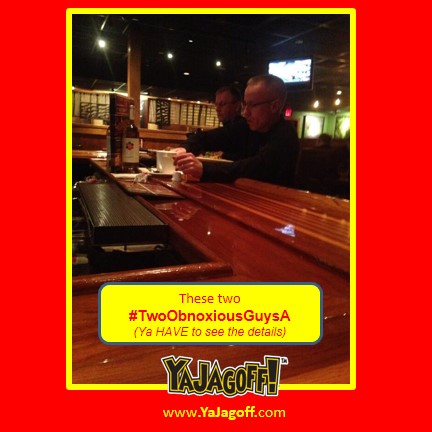 Tuesday night I was eating a late dinner by myself at an out of town Outback. Since I was by myself, I chose to eat at the bar. Much to my dismay, there were two older guys, pictured above, sitting at the bar trying to be “those two funny older guys at a bar”

You know the type…. they have loud conversations between themselves, making jokes, so that everyone will look over at them and acknowledge their WHACKYNESS witha a laugh or a “those guys are crazy” kind of comment.

What they don’t realize, is that they are obnoxious and everyone in the bar would probably offer to buy them drinks so that they both pass out and shut up!

In my lonely boredom, I chose to tweet the comments that these guys were making, especially to the female bartender, who by the way, was just as sick of them as the rest of us around the bar. As I tweeted more and more with the hashtag #TwoObnoxiousOldGuysAtBar, more people started to jump in on the twitter feed. I was no longer bored and even had to order another unwanted beer just so I could sit at the bar and tweet the Jagoffery of Willy Lowman and his wannabee buddy.

Not all tweets are below but I’ve tried to recapture the fun.  I have to tell ya, the twitter-er-ers that got involved made my night!

The Tweeting was on!

#TwoObnoxiousOldGuysAtBar “Hey, I had your attention when I said we party all night didn’t I?” —  (@YaJagoff)

#TwoObnoxiousOldGuysAtBar “I’ll take the best soup you have in the menu!” …BTW we are at an Outback! — (@YaJagoff)

@YaJagoff Be sure to call them Statler & Waldorf. “Ha ha ha ha-ing” themselves! pic.twitter.com/APQHy72Sjs —  (@BurghJacks)

Statler & Waldorf from the Muppets

#TwoObnoxiousOldGuysAtBar “I’ll take the best soup you have in the menu!” …BTW we are at an outback —  (@YaJagoff)

#TwoObnoxiousOldGuysAtBar bartender says “do you want more?” Guy says “I hope you mean bread and butter ” (the two of them hyena laugh ) —  (@YaJagoff)

#TwoObnoxiousOldGuysAtBar “can I have my beer in a mug specially prepared by you?” —  (@YaJagoff)

To which this response came.

@YaJagoff I just knew it 🙂 Do the guys look like they should be in an ATT ad? As in “did it hurt when you fell from Heaven” commercial?

#TwoObnoxiousOldGuysAtBar “you know what’s really cool, I’m a lucky guy tonight to have YOU serving us!” —  (@YaJagoff)

#TwoObnoxiousOldGuysAtBar “how good is your coffee?” Once again, you’re at a freakin outback for crissakes

#TwoObnoxiousOldGuysAtBar one dude just gave her a dirty joke to read on his phone. Surprisingly they haven’t high-fives each other yet

@YaJagoff take a shot every time they call her “hon”, “missy” or “sugar”. Take two for “sweetheart”

@YaJagoff the closer guy kinda looks like the dude whose eyes melted out of his face in #RaidersOfTheLostArk. —  (@MammothPowSkier)

#TwoObnoxiousOldGuysAtBar “do you spell your name with one L or 2 Ls?” Other guy “oh no! They’re getting creepy now!l. (Nope you have been) —  (@YaJagoff)

At this point, ____sends me the tweet below with the Saturday Night Live Czeck Brothers

#TwoObnoxiousOldGuysAtBar “Do you spell your name with one L or 2 Ls?” Other guy “oh no! They’re getting creepy now!l. (Nope you have been)

I felt like I had enough of food, beer and THESE GUYS but I got this tweet,

.@YaJagoff this is totally Liz Lemon’s dad in that #30Rock episode. —  (@MrVinnieSays)

@YaJagoff that poor girl. She’s probably very glad to have the bar between them & you as “normal” company. — (@MayemSnyph)

#TwoObnoxiousOldGuysAtBar the beat one yet “hey gorgeous” other guy says “it’s Gally..Allyson and gorgeous” yes there is now beer in my nose —  (@YaJagoff)

#TwoObnoxiousOldGuysAtBar leaving now. Just told bartender that I’ve been tweeting their comments. She was quite amused. Gave her hashtag — (@YaJagoff)

This thing went on for 45 minutes! The bartender said those two guys had been there for 4 hours! The next day, this is the tweet that I got from the bartender..

#TwoObnoxiousOldGuysAtBar they were the worst. Made me want to go all Mexican and cut someone.

Hey.. Willy Lowman and Sidekick, please go get a radio show on some AM radio station or get your Whacky Morning Show Wannabee jokes out on a podcast or something because, an entire bar was dying to tell the two of you to SHUT THE HELL UP, Ya Jagoffs!!!  (But thanks for the entertainment!)