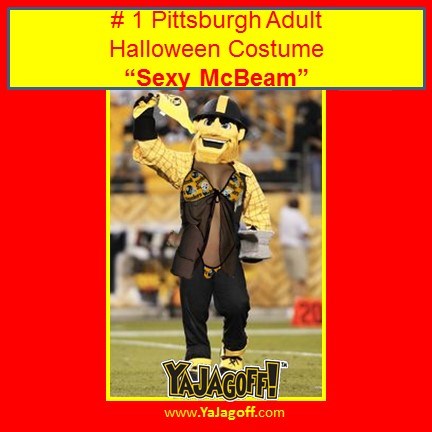 Two years ago, we started a thing that we call research (as far as you know)  The photo above was the top-selling costume the first year.

I’ts’ a new year so what are the top selling Pittsburgh Halloween Costumes according to our SJU’s (Special Jagoffs Unit) research of costume store sales in the Western Pennsylvania area?

As usual, all of the best sellers had a “sexy” theme.  Many of these you can get on discount as of today since the big party weekend is over!

First up… a hold-over and adaptation from last year’s Parkway West construction worker costume.  Because of the extended work on West Carson Street, this costume was pretty popular, especially in the western Allegheny County suburbs.

Next up is one of 2 hockey-related “sexy” costumes that seemed to be extremely popular this year.  The first one, Sexy Stanley Cup is built for a female.  There’s no verification that it is a knock on the 2015 news story that an 18-year old slept with Jagr and tried to extort him with an in-bed selfie pic.  As you can probably tell, this is a very involved and expensive costume given that it is engineered so that the costume wearer can be carried around in the costume’s Stanley Cup portion.

The second hockey-related and 2nd most popular Halloween costume in the Pittsburgh area this year was the “sexy” Jim Rutherford.  Oddly enough, it’s a very comfortable costume given that it comes with a rolling chair and a press conference table (also on wheels).  However, it was determined to be very difficult to wear while going through hotel revolving doors and on escalators.  We saw this costume in the Strip District for just under $59.

And finally.. the number 1, top-selling, Halloween costume in the general Pittsburgh area in 2016 was, the sexy Liberty Bridge… complete with burned tarp.  We saw this in WalMart at a cheaper price but the tarp portion was more of a cheap plastic.  The more expensive version, again, at the costume shop in the Strip District, had authentic tarp material with scorching that would dangle down over the front of the wearer’s right leg!  As you can see, this is another costume that could give you fits in revolving doors or narrow hallways.  However, the sales of this costume spiked as the bridge re-opening was delayed 2 times.

There ya have it!  Happy Halloween!