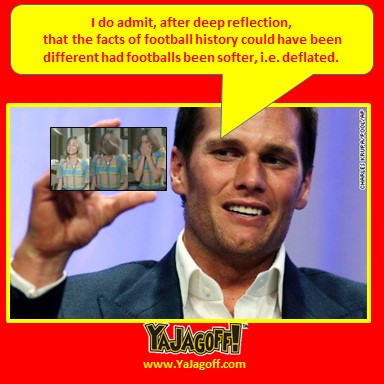 Yesterday, Deadspin and others released the NFL report on the deflated footballs and, well, it appears that a couple of dudes thought it was cool to be hanging out with THE Tom Brady.  The NFL report reveals the various texts between the guys, whom at least one of them, Brady allegedly had said prior, that he didn’t know.  And, of course, those 2 guys turned over their phone/text records to the investigators but, Tommy-boy decided to “pass” on letting his phone/text messages be searched.

Subsequent to his presentation last night in the Salem area (no it wasn’t a witch hunt but pretty cool that we both thought of that at the same time, huh?) Tom gave our SJU (Special Jagoff Unit) an exclusive sound bite which appears to be the beginning of his defense: “Footballs should have been made softer a lot longer before now!”

He candidly admitted that, had someone thought of deflating footballs a lot earlier, Marsha Brady’s nose injury (Brady Bunch Show) would have not been as devastating and emotionally traumatic. And therefore, if he DID have anything to do with deflating footballs, it was for everyone’s own good.

OK.. that didn’t really happen but it’s about a feasible and whatever his cast of 55 attorneys might come up with over the next week while the other two dudes, on the other side of the texts, take the fall for ol’ Tommy Boy while he forgets that they actually exists.

Hey Tommy…good luck on this one, Ya (lying) Jagoff!