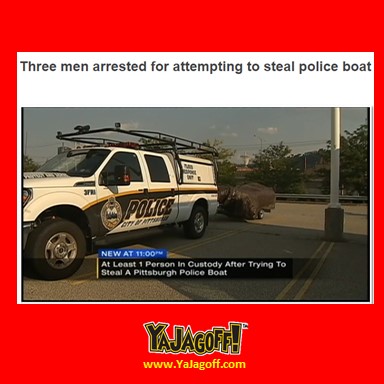 Life never seems to fail me when I’m in need of a blog post topic.  Especially when there is alcohol involved.

Allegedly, 3 guys, in the shadows of Heinz Field where there was a big soccer game going on with the women’s U.S. Soccer Team playing… (packed house… like waaaay more people than go to a Pitt game), were caught at the police HQ’s, on the North Side, disconnecting the Police Boat trailer from it’s tow vehicle and attempting to connect it to their own trailer hitch.

To be honest, I think we have all stolen something OR considered stealing something.  So you know how you rationalize why/how you should steal that item.  For me, I basically consider stealing anytime I see something with chocolate in it.

On the other hand, I can’t say that I’ve ever had a craving to steal a boat. ESPECIALLY one that has the words Pittsburgh Police on it.  Aaaaaand, especially from a place that has a bunch of police vehicles sitting in it that, more than likely, has some kind of surveillance cameras looking at it 24 hours a day.

But, I try to be understanding in all circumstances so, I try to think of WHY would anyone want to try and steal a Pittsburgh Police boat. Is there a significant black market for police boats where you can get huge thug dollars which potentially balances out the chance you’re taking by stealing it?  What would you do with it if you got it home?  You couldn’t show your friends, pick up chics with it or post selfies of yourselves with in on Facebook.

I just can’t figure out your angle on this one.  My suggestion is, you come up with an alibi that you were planning on taking the boat out to fish and donate your bounty to the food bank.  It won’t work but, it’s gotta be better than whatever you were really doing like…”Hey.. we started drinking and one thing lead to another and Joey dared me to do it so, I did it.  You can’t back down from a dare!  After all, we’re blood brothers… we cut our fingers open an hour earlier, touched them and took an oath!”

Well, you guys have certainly made some “waves!’ (Yeah.. I did that all on my own)

Wait!! Try  this… say that you are helping with a movie production scout.  Say Bruce Willis coming back to town to make a senior-citizen re-make version of striking distance where, he’s a very elderly retired police officer  that is trying to make it to the toilet in time, or within “striking distance” before he urinates on himself?

And here’s one final note.. the next time you all get together and start drinking, do the werewolf treatment..lock yourselves in a room without cell phones and only have someone let you out once you’ve made the transition from “Drunk and stupid” to hungover.  That will help protect you from yourselves, Ya Jagoffs!