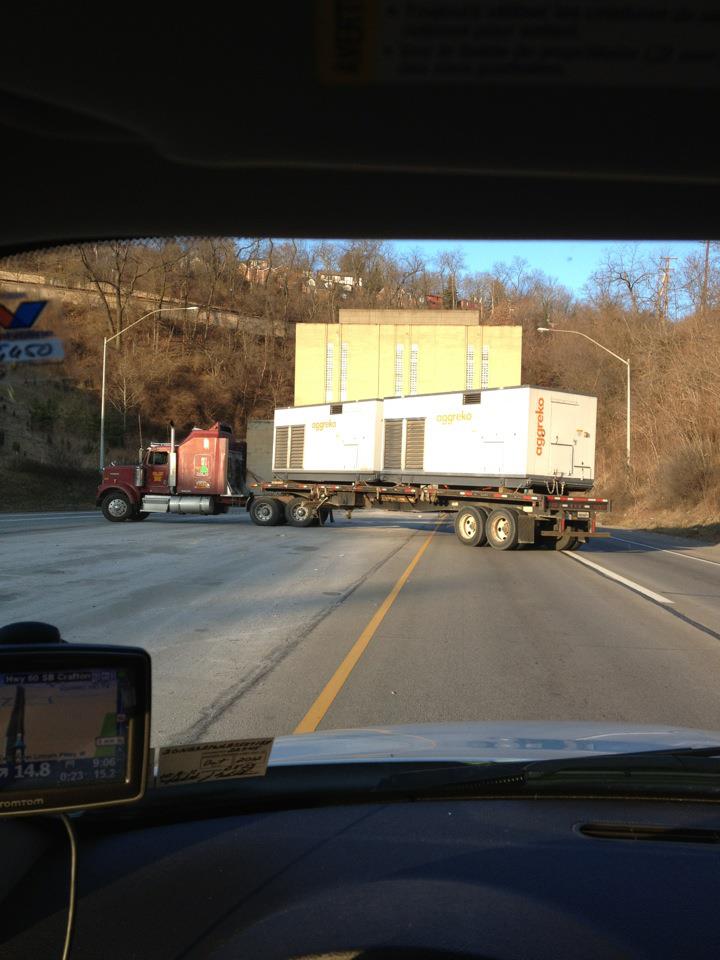 This is an exciting post.  Sooooooo exciting that we bumped our previoiusly scheduled post for today for this one.  Now this is not our first Trucker Jagoff post.  However, it’s one of the first posts to come through our new SUBMIT A JAGOFF page.

Here’s the message that accompanied the photo:

Driving into work this morning on the Parkway East. Traffic was pretty backed up and was bumper to bumper to the tunnel like normal. Saw this jagoff truck that was OBVIOUSLY over height and hoped that he would be wise enough to exit the Parkway before he got to the tunnel. No such luck. This jagoff decided to close down the tunnels so he could turn around! What part of 13’ 6” maximum clearance didn’t you get???

Seriously?  We almost don’t need to write anything here.  This is a proud moment because the BESTEST part of this entire scenario is, here’s our man, sitting in his vehicle watching this happening and he says to himself, “Hey!  I have to get a picture of this for that Jagoff website.”  Haaaa.. haaaaa.. oh, boy!

A proud moment for us… just as proud as the day I finally graduated from kid to man (as verified by the Kennywood School Picnic that year when I finally got to sit on the RIGHT SIDE of the Kennywood Park Thunderbolt rollercoaster seat thusly SQUASHING an unsuspecting passenger on the LEFT SIDE as it made that big turn coming down the first hill!)

So this trucker.. he drives in the Parkway (at rush hour) and passes some signs saying there’s a tunnel ahead.  He CAN’T be driving THAT fast because its rush hour.  Next, he passes some signs that say the tunnel is 13′ 6″ high.  It’s not until the entrance of the tunnel, when special lights start flashing at him, that he decides to think, “Hey, I wonder if my truck is to high for this tunnel?”

There are numerous jokes to be had here about how large 6″ is and who’s definition of 6″ (male or female definition) he used  but we’re not going there.  But it’s clear that this trucker knows how to measure just about as good as I do (as verified by my father-in-law who asked me to measure and order some replacement windows that he thought could be installed in about 2 hours but actually ended up taking him 6 hours because he had to rebuild what seemed like half of our house since the new windows were actually 10″ shorter than the holes in the wall left by the old windows.)

Hey there our Measurement-challenged-Windshield-Warrior, maybe we need to add those “how tall was the prepatrator stickers” that they have on the convenience store door frames to the all of the mile-marker poles!

A big THANKS to our Jagoff Catcher of this post, Derek Sweeney, for thinking of us in his time of misery and crisis in traffic yesterday.

In this article: Truck Driver Jagoffs