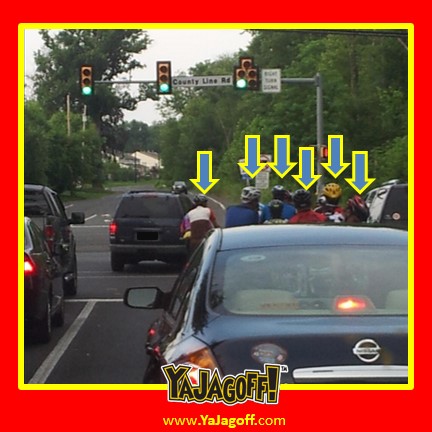 It’s been a looooooooooooong day at work.  You can’t wait to get home.  And you know that there will be some jags in your way… bulldozers, buses, overloaded trucks… but a bunch of cyclers?  Below is the tweet that accompanied this photo:

Really, the whole lane during rush hour! Nothing like driving home at >20 mph on the way home!

Yes!  We know the whole idea of “share the road” with the cyclers.   And, (just as most people preface inflammatory  comments that they are about to make) SOME OF OUR BEST FRIENDS RIDE BICYCLES.  But really?  Bunching up and holding traffic back (not just at the stop light)?

Hope that YOUR hearts and blood vessels feel good doing this because, just so ya know, driving behind your group has been cited by BOTH of our Jagoff cardiologist buddies as causing the same amount of stress on MY heart as sprinting up Sycamore Street with 2 bags of groceries, a gallon of milk and a 5 lb bag of kitty litter.

And by the way.. notice we APPROPRIATELY called yinz all CYCLERS and not BIKERS (riding motorcycles).

To be 100% truthful, if you were a group of tattooed, sleeveless, denim-vested, over-sized, unhelmeted BIKERS, we would have been too afraid to take say ANYTHING!  But since you’re skinny, little, no-hair-on-you-arms-and-legs CYCLERS, we’re saying.. get outta the way… you’re in between me a cold beer and 4 slices of pepperoni pizza, Ya Jagoffs!

Thanks to @biggdeck on Twitter for the pic and for being our honorary Jagoff Catcher!