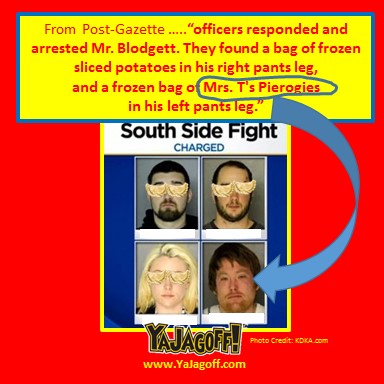 There’s some alleged fight on the South Side at 2am…not so unique.

But these yinzers ALLEGEDLY got into a fight on the South Side (see PG Website) and the dude, whose identity is NOT protected with pierogies, had, “a bag of frozen sliced potatoes in his right pants leg and a frozen bag of Mrs. T’s…………”

And there ya have it… his REAL criminal act!  Roaming around the South Side which, I don’t believe any single point of, is any further than 5 blocks of some church or local business selling fresh pierogies ESPECIALLY during Lent and he has Mrs. T’s!  C’mon guy…. if you’re gonna fight local, you should at least shop/allegedly-steal local!!!

Dude….I hope the South Side magistrates have pity on you for this.  I hope you understand the gravity of your mistake, as my 85-year old 8th grade nun, Sister Concessa, would say.  One suggestion if I can be so bold, if ya try to allegedly steal butter and onions on the next go-round, make sure it’s not hot… cuz no amount of frozen ANYTHING will help THAT pain, Ya Jagoff!