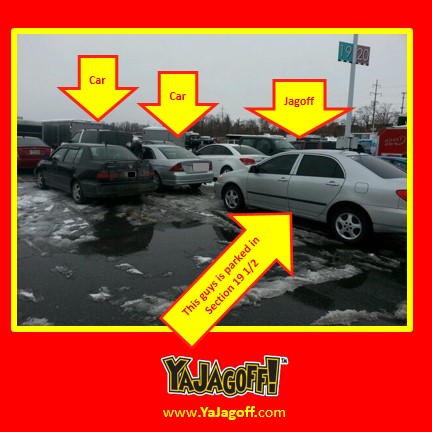 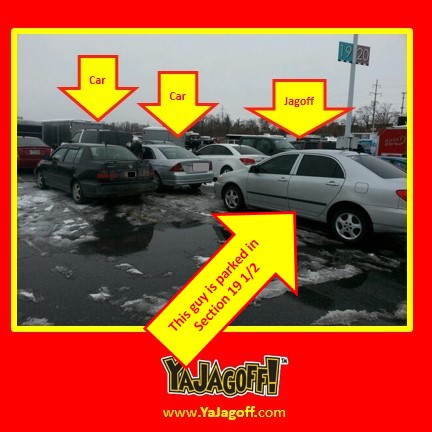 OK.. so sometimes the parking pics all seem the same… someone over the line, someone half in a space but this one is a capture of complete ignorance.

This is the tweet that accompanied the pic above:

Thanks #JAGOFF for parking @Cliqueasaurus and I in

So this person pulled up.. said..”Hmmm, I better pull up close to that car in front of me,” gets out of their car and heads off.  Never once realized that they have made their own parking lane in row 19 1/2 and now, the people from the Monkey-in-the-Middle car were now stuck waiting until someone was done with their shopping… hopefully this it wasn’t one of those senior citizen guys that sits in a McDonald’s sipping the same cup of coffee for 5 hours.  Our Jagoff catchers could have been skeletons by the time they had a chance to get their car out.

Wait… maybe this driver thought the vehicle parking rules were the same as the cart return rules, “Jam those sunza-bithces together!” No, even better, it’s a new game based on the “Duck, Duck, Goose,” game called “Car, Car, Jagoff!”

I’m putting the SJIU (Special Jagoff Investigative Unit) team on this because, this person is an obvious menace to society….. you’re that  SAME person that comes early to every family picnic, pulls all the way in the driveway, and then wants to leave FIRST, Ya Jagoff!

Thanks to @JD_Pgh and @Cliqueasaurus for being Honorary Jagoff Catchers!