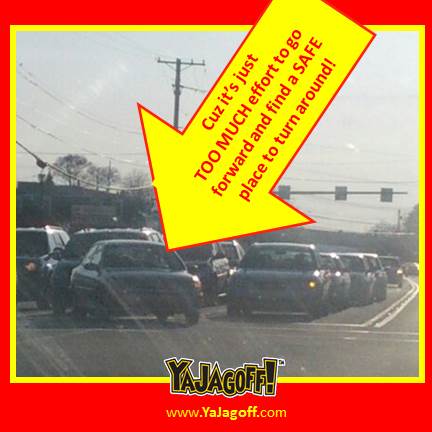 Surely you have heard of the “Pittsburgh Left.”  What you see in the photo above is, a complete lack of respect for other drivers, selfishness and what WE would call, the “Jagoff Left.”

We’ve all been in the wrong lane at some point (happens all the time on McKnight Road near Ross Park Mall) and then you’re stuck.  You look to see if you can take advantage of a 12-14 inch opening in between 2 cars and you dart over into the lane you want.  It sometimes results in you getting a horn but, if you smile, gave a fake “thanks buddy” wave then, well, no biggie!

And sometimes you are forced to go the direction you didn’t intend to go but you drive until you  find a safe place to turn around and get back on track.  Of course, the whole time you’re doing this your GPS voice won’t shut the hell up… “Recalculating… Turn Left Ahead…Recalculating, Make First Right.. Recalculating.”

But not THIS Monroeville driver…..he/she made a mistake and.. well, they’ll just fix it by just pulling in front of someone.  And no doubt, when that someone beeps and yells at them, this Monroeville driver yells back as if its the OTHER guy that’s the Jag!

Hey you might wanna get off that phone and stop talking with your hands and concentrate on where you’re driving cuz you’re making a great case for installing sub-bumper-tire-flattening-torpedo-darts on all future car models, Ya Jagoff!!

Thanks to @SixDegreesPGH for being our Honorary Jagoff Catcher today.