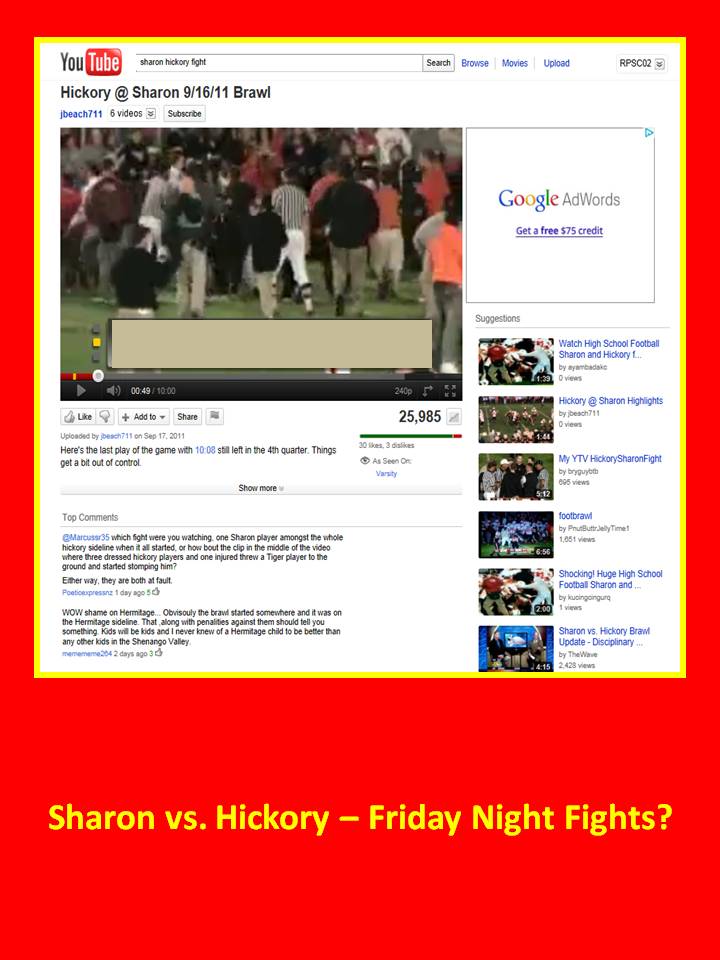 Ok, if you haven’t seen this yet, click above to play the 10-minute video of a big deal fight that took place at a high school football game bewteen Sharon and Hickory High Schools last Friday.  It’s a PROUD moment for Western Pennsylvania high school sports!!  For those without internal geo-coding,  Sharon and Hickory are kind of inbetween Cleveland and Pittsburgh – an hour or so from both.

So, during a play, two players run out of bounds.  One kid pushes the other kid.  The other kid gets his feelings and manhood damaged so he pushes back.  Now they both feel the need to act like studding male rams vs. displaying any personal or team pride or sportsmanship soooo they push each other more and start to punch.  The next thing ya know,  both teams and their coaches are in a fighting flash mob.  (How’s that anti-bully, anger management stuff working at the high school level?)

Coaches and parents, nice work preparing your kids on how to handle themselves in life AND on the football field.  Fist-fights solve EVERYTHING in the world after high school.

To the players: when you’re watching the YouTuve videos of your festivities, you’ll see that some of them have pop-up ads for tech schools.  You might want to take note of those websites and phone numbers because we’re thinking, with THAT kind of personal restraint and sportsmanship, those college football scholarships are a little out of reach!

And, EVEN MORE, to the people writing the “hey neighbor hi ya doins” and calling out the players and each other on the YouTube comments vs. letting this issue die,  we just say, “Don’t you have cable up there to entertain you?”  (We might reccomend watching the 700 Club.)

To all of you involved in this ordeal that made national “embarrasing” news, NICE WORK reppin’ da town.

Just so you all know, if we are talking about the Sharon area as it refers to Reyer’s Famous Shoe Store or Winner, Inc. (Inventors of “The Club”) we will continue to  refer to Sharon, Pennsylvania as being “only about an hour from Pittsburgh.”  But when we refer to your football brawl, the WPIAL hearing, any subsequent law suits and YouTube verbal bashings, we hope you don’t mind if all of us refer to the Sharon area as, “just outside of Cleveland,” YA JAGOFFS!!!

NOTE: No matter WHAT happens at these upcoming hearings, you are ALL in need of some SERIOUS “Jagoff Rehab.”

Please refer yourselves to BOTH of these Pittsburgh websites: Secret Agent L and Dignity And Respect