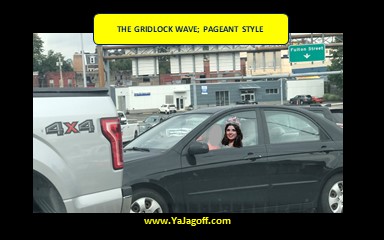 Men are from Mars and women are from Venus has always been a ‘thing’ that the famous book depicted and basically better categorized male and female type things.  While I think most of the road rage type ‘things’ are more suited for the male category, there is one female category that IN MY OPINION fits.  It is not the get out of a routine traffic ticket trick in which we puppy dog-eye a cop to get out of a violation….that is absurd!  NOPE! It is the ‘I think I can sneak through this light and inch my way into traffic without causing gridlock’ belief.  Sigh.  But if it looks like it may cause gridlock, it causes gridlock.

Case in point, rush hour on the West End Bridge with multiple lanes clogged and what seemed to be a quick changing traffic light day.  “Ms. Thing” thought she could make her turn from the North Shore to get into the left lane getting onto the bridge…YIKES!  No sister there is not enough time and the cars in front of you beginning to stop and create a standstill should be enough indication.  It is not.  She edges her way in.  So much that she did the girl’s famous sit up more and stretch the neck enough to seem like there is a strategic system to overcome traffic gesture…..nope, it doesn’t work.

Instead, a series of horns and hand gestures begin to take over the scene.  Instead of portraying the classic female head tilt and eloquently mouthing ‘sorry,’ she proceeded to wave to everyone.  Oh boy.  It is bad enough that you did the chic inch up, bad enough you faked that you were trying to help the gridlocked situation, you had to keep it up?  Thanks for owning the gridlock move with a pageant-like wave ya jagoff!