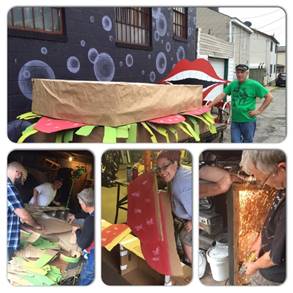 Well, this year’s YaJagoff.com entry into the “Anything That Floats Race” was intended to be a floating Primanti Brothers Sandwich, known as #FloatingPrimanti on Twitter and Instagram.  You might recall our Pittsburgh #FloatingParkingChair from last year’s race.

This year, under the guidance of Chief Yinzerneer Dave Calfo (Pittsburgh’s well known Salvage Artist), we built a vessel that looks great!  But, looking great isn’t enough. Our entire team was glad that the Regatta administrators cancelled the race for safety precautions but, now the #FloatingPrimanti needs to hit the water, mainly because Chief Yinzerneer, Dave Calfo, needs to get his garage space back!

Key Point:  Had the #FloatingPrimanti vessel taken first place at the 2015 “Anything That Floats Race,” we would have won a $2,000 donation for the Pittsburgh Emergency Medicine Foundation (www.PEMF.net).  Therefore, if you see the #FloatingPrimanti in the water on Sunday, or see us wallowing around in the river with a sinking vessel, feel free to go to the PEMF website, and make a small donation.  Our goal is the $2,000 that we missed out on.

The #FloatingPrimanti will ATTEMPT to float in the Allegheny River this Sunday, July 26th, between 1:15 and 1:45pm near the North Shore and PNC Park while the Pirates are playing.

Due to river conditions until now, the #FloatingPrimanti is not tested so, we have no idea how long it is going to float therefore we suggest you have your film, flashcubes, VCR cameras, digital video equipment and smart phones ready.

Special Thanks To Amy and Ryan at Primanti Brothers, North West EMS, Pittsburgh River Rescue, the Coast Guard and to Kayak Pittsburgh for the ongoing support!