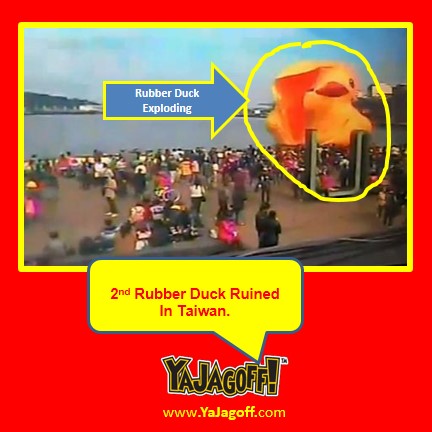 Remember the Giant Rubber Duck that came to town and caused everyone to go absolutely bonkers? 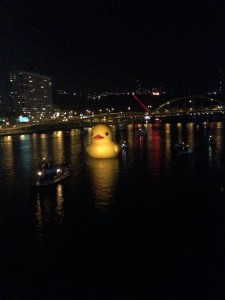 Well, that same duck was in Taiwan, for the second time and was ruined FOR THE SECOND TIME!!

Here’s video of the exploding duck:

That duck came to Pittsburgh during one of the most raucous times… the Pirates making it to the playoffs for the first time in 20 years.  People were jumping off of bridges, setting off fireworks… there were even angry Cincinnati Reds fans here that could have sabotaged the duck as it sat, (get this one) like a SITTING DUCK on the Allegheny River.  It even survived angry Steelers fans who were crazed over the Steelers horrible start to the season. As a matter of fact, I am fairly certain that the duck had a few Primanti Brothers sandwiches and even THOSE didn’t fill it with enough gas to make it explode.

This is our duck.  Blowing it up is not quite as sacrilegious as stepping on a Terrible Towel but it’s close.  I’t like the Steelers, once they are ours, for good or bad, they are always ours. … same with the Giant Rubber Duck.

Send back our duck Ya Jagoffs!