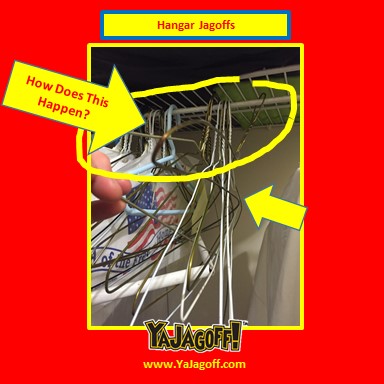 I’m fairly certain where the evil elves go once they dig through my Christmas lights, that were put away so handsomely, and tie them into well knitted afghans.  They don’t go on the seasonal unemployment line.  Like landscapers who become snow plowers in the winter, the evil elves become professional hanger-tanglers.

And, they strike at the most inconvenient times… when I am in a hurry trying to grab a hanger.  Sure enough, I eye up the set of hangers and, despite how I have un-rubix-cubed them in my head, I pull that one out that is tangled around the necks of 4 other hangers!

I swear that, I could grab the one wire hanger that was 5″ away from every other hanger and, as soon as I pull on it, it will reach out and grab 2 or 3 other of its brothers… just like a baby reaching for its mother as its being passed to toothless, open-mouth-kissing, chin-whiskered Aunt Emmy who has lipstick all over her teeth and all over her upper lip.

As much as I try to take half of a day to line those things up after nearly yanking the entire wire shelf in anger, they still go back to tying themselves together.

Can someone paleeeeeze  take this on in the 2015 version of Junior Achievement classes????