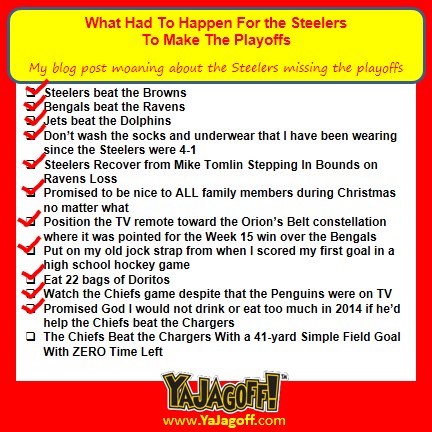 Seriously… we had all resolved ourselves to the fact that, it was basically impossible for the Steelers to make the playoffs this year.  Even if we beat the lowly Browns.  But then….

The Jets beat the Dolphins… the Bengals beat the Ravens…and suddenly we were all like, “Cancel the Canasta plans for tonight.  We have to watch the Chiefs and the Chargers!” and “Can someone paleeeeeeeeeeeeeeeeeeeeze teach dad how to work the PREV CHAN button on the remote before the Penguins game starts?”

And we all sat on the edge of our seats… cheering, yelling, throwing things, hating Andy Reid for not starting his top players but eventually loving Andy Reid because he was clearly playing to win.  So we had some hope.

And then……………………………………………Ryan Succop (soon to be known as Ryan “Soapword-up” in Pittsburgh) misses that game-winning, simple field goal with no regular time left in the game.  As a result, about 25% of Steelers fans are out at Best Buy still trying to get Holiday pricing on new TVs because things were thrown at/through their existing TVs last night!

Far be it for Steelers fans to blame our own team for not making the playoffs.  Its a helluva lot easier to blame one guy from the Chiefs.  So…..

Ryan… seriously… you had one job… ONE Soapword JOB….thanks a lot for making us miss the first half of the Pens game and for making half of Steelers Nation page their Cardiologists on a Sunday evening and the other half choke down 5 bottles of Tums per household for absolutely NO GOOD REASON, Ya Jagoff!

In the meantime.. thanks to the Steelers for the pride they showed in getting back to 8-8 this season!

And don’t think that the scenario below didn’t happen at some point yesterday. 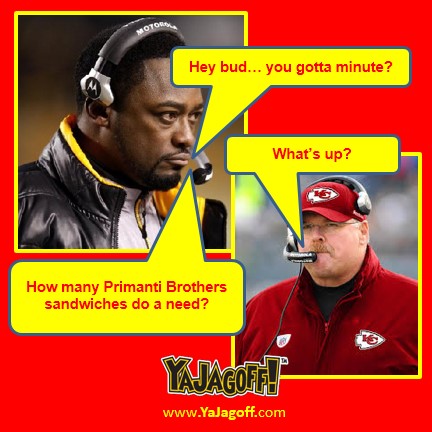