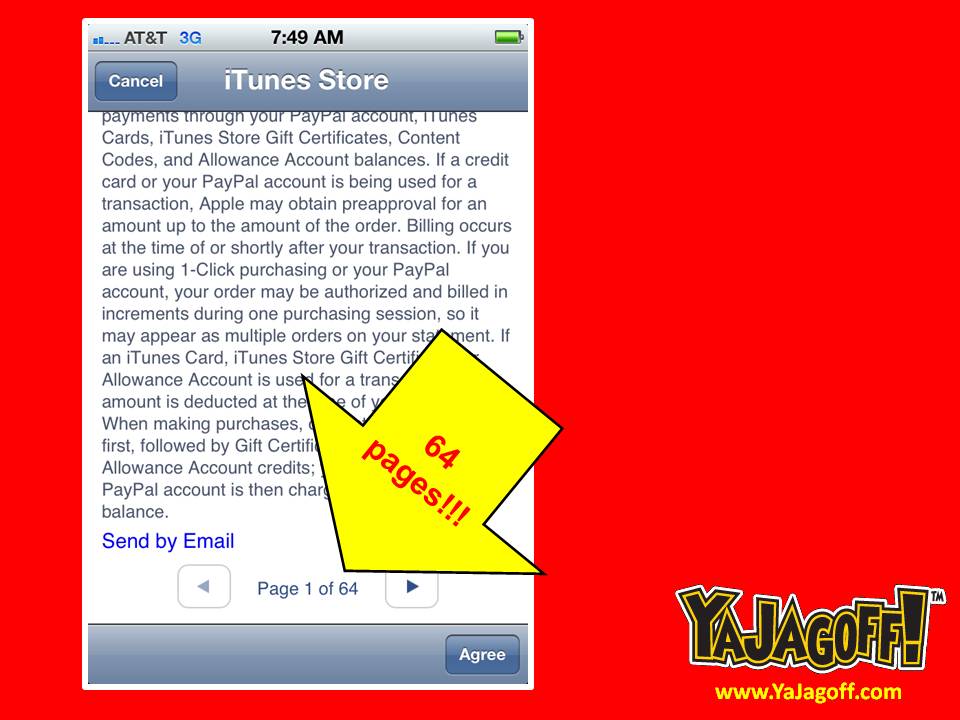 Finally it’s come to this.  We like our iPhones.

As a matter of fact, when everyone was buying iPhones when they first came out, and justifying to themselves, “I need an iPhone because….”  WE openly admitted, we just wanted one because they were “cool.”

2) What does it say?  Is it the same stuff that we slept through in high school trigonometry class or does page 31-62 just spell out what Charlie Brown’s teacher used to say, “Waa..wa… Waaaaa…wa..wa..waaaaa….waaaaa..wa…wa…waaaa.”

We simply click “OK” or “AGREE” which can BASICALLY  be interpreted as, “I just want to down load this @#$@# app so I’m going to click your pain-in-the-!@#!@ Jagoff button so that I can get it despite the fact that somewhere on page 12 it says I owe you 2 children by the year 2034 and that they must become Apple programmers, and page 19 says that we swear to never purchase anything from Bill Gates or anything referring to GATES including the new gates on our cyclone fence and page 31 states that, if anyone at Apple sings karaoke at a bar, I must download an MP3 file of it at a fee of $1.99 and on page 59 it says that I must have an iPhone chip surgically inserted into the back of my neck like they do to cats at the Humane Society and then on pge 61, paragraph 7, subsection 8a it says that, if I ever throw my iPhone at the ground or a wall, that chip can be activated to provide a lethal shock to my heart” Ya Jagoffs!!!!!