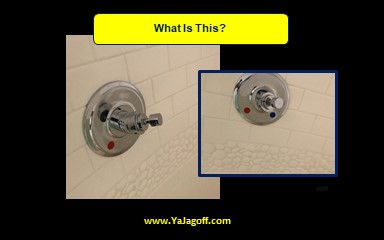 As a back story, the first thing I do when I get to a hotel is use the “shower iron.”  You know, when you turn on the shower at to scalding so that you’re running a fine line between steaming the wrinkles outta your clothes and steaming the wallpaper right off the walls. It’s a miracle-level travel hack and sure as hell beats pulling out the moldy hotel iron and the clanky hotel ironing board.

That said, I’m in a hurry to get to dinner and drinks.  When I put my things in the “shower iron” for steaming, I should be able to negotiated the water controls fairly easily. I shouldn’t have to look for a manual or have to stand IN the shower, looking at the water controls sideways, like a dog looks at an owner that keeps saying, “go for a ride?” in a baby voice, to figure out the controls.

I had to look at that thing closely to make sure there wasn’t a lever broken off. Once I finally figure out that the stub rotates sideways/upward to control the waterflow, I push the stub toward the red dot to achieve the ultra-hot steaming that I need.  NOPE!  Turns out, ya have to point the head of the stub to BLUE to get hot-steaming water.

Well.. the clothes eventually steamed and, luckily, like a old time safecracker, I figured out the “code” to the shower stub so that, when I am in there for real, I don’t end up with 3rd degree burns or dancing around in ice water.

Hey swanky hotel peeps, please install some standard, or at least more intuitive, shower controls…my smartphone and computer own the job of making me feel and feel stupid, YaJagoffs!