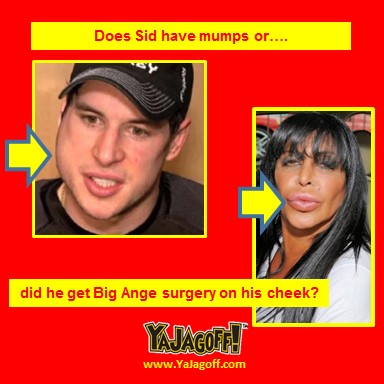 Yesterday, the Penguins admin announced that Sid has the mumps.  However, prior to that, the news from the Pens camp was, they weren’t quite sure because he had received and injury to his neck in the Carolina game.  They had to make sure that swelling, in his neck and face, that looked like every other mumps-laden NHL player, was indeed mumps.

Is there anyone out there, even the kid who’s repeating his first year of Guatemalan medical school for the 6th time, who did NOT think that Sid had the mumps based on the history of how many NHL players have had the mumps and what his face looked like?

Yes, a medical diagnosis has to be based on evidence and not a “if it looks like dog poop and tastes like dog poop, it is probably dog poop,” decision-making process.  But jeeeezus…..I think it would have been more believable to say that Sid was planning on having a spot on Housewives of New Jersey and was consulting with Big Ange on beauty secrets, ya… (wait.. I’m chicken-ing out!!!  I can’t call the Pens admin ja…um……..) Ya Ja……. NOPE!  Can’t do it!!

But thank GAWD we all now admit that Sid DOES have the mumps!

What did YOU think could have been a reasonable explanation for Sid’s face?  Comment below.