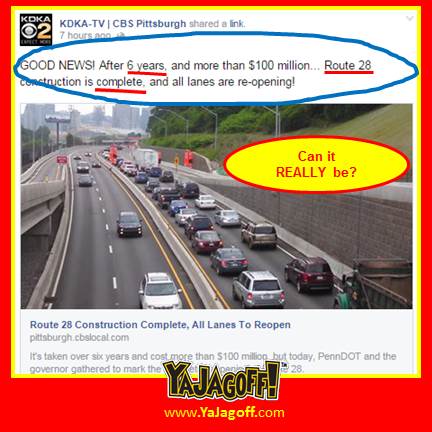 Even people who moved away from Pittsburgh and come back every 15-20 years know to plan for erratic traffic patterns due to construction.  I’m fairly certain that George Washington wrote about them in his logs.

But, according to this news report at KDKA-TV, the work on Route 28 is officially over… completo….finito…done-o!

My question to you, how long will it be before Duquesne Light, a gas company or water company heads out to that stretch and digs up a manhole cover OR, even worse, just puts a hole in it to check a valve?  And then, of course, replaces that 4 x 4 foot section with some cheap black top that starts the pothole parade progression?

You’ve seen it….. a road just gets a nice finish and BOOM… within a week some utility is jack-hammerin’ a square out of it.

In the meantime, what the hell are those people “up 28” gonna use for being late to work from now on?  Hell, they might even be early for work these days for the first time in 6 years!  What will Pittsburgh traffic reporters do to fill time… the time that they used to use talking about the #!* that was going on Route 28?

Wait!  Do you think the the Route 28 construction was created by the local traffic reporters so that they would have jobs??

I’ve digressed, so let’s say this… thanks to those who worked their ARSES off on that road and even got it done early AND under budget.  And for you utility peeps, stay the hell away from that road with your backhoes, bulldozers and air-compressor tools or owl get Sister Anecita outta retirement to come out there and bash your jack-hammer-shovel-pick-some-stand-around-and-do-nothing knuckles Ya Jagoffs!!