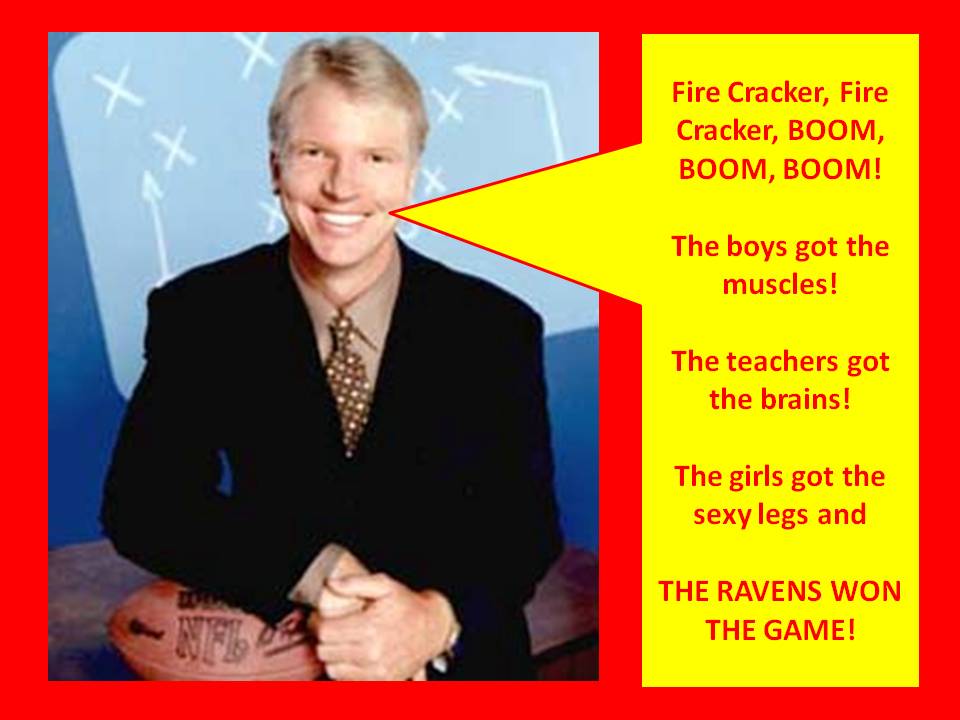 Chick-fil-A Nuggets are as addicting as CRACK COCAINE!  That has NOTHING to do with this post other than, while writing this, I am snacking on day-old nuggets.  WOW!!  Just had a pee-shiver!!!! (Yep, they’re that good!)

Now to today’s post.  Surely we are all smart enough to realize that most of us are “homers” and we TYPICALLY think that national announcers are anti-Steelers when they say something good about the other team.  However, yesterday’s game, while it had many PMOM’s (Piss Me Off Moments), it only got increasingly WORSE hearing Phil Simms talk out of his sigmoid colon.  I was actually trying to tweet the network to say, “When he is talking about how great the Ravens are, could you please ask Phil Simms to spread his butt cheeks apart so that his voice isn’t so muffled!”

To relieve OUR  frustration during the game, we posted a note on Facebook and Twitter, offering a free t-shirt for the best reason to make Phil Simms a Jagoff.  We chose two:

TWITTER FOLLOWER @SuperStillers: He (Simms) was just anti-Steelers and seemingly on purpose. I think what makes him a total jag is that play with Ike Taylor when the big fight broke out. He was all over Ike for hitting Oher in the head when meanwhile the reply clearly showed Ike getting tripped first.  Now don’t tell me when they review other plays they don’t have someone in their ear telling them what to look for. Then he has a chance to reply back and say “hey, rerun that for me so I can use my telestrator thinggie.” Every other play, especially the ones being reviewed officially, they watch at nauseam. But not this one. It was clear Ike retaliated and every replay they showed started at his hit not Oher’s trip.

A VERY good PRACTICAL reason, and one of many, to substantiate a Jagoff labeling.

Then, with emotions high cuz of the Steelers getting their brains beat out of them, there’s this reason:

TWITTER FOLLOWER @abowerstafford:  We should make Simms a jagoff simply because we can, and it’ll make us feel just a little bit better 🙂

Haaaaa.. yep.. THAT’S one we can all put our passion behind.

Hey Phil, you probably typically do a good job on OTHER NFL games AND you have great TV hair, but our Steelers played so horrible yesterday that some ‘Burghers actually switched over to watch the Pirates lose (less painfull because we’re back to expecting that).  And since it was the FIRST game of the season, we ARE NOT ready to blame any of OUR players or coaches for this “TRAVESTY IN BALTIMORE,” therefore you are going to be the unfortunate target of our emotions.

So to Phil McGroin, who has more mousse in his hair than the Alaskan Frontier (get it MOOSE? haaaa) , you had a great game along with Alice, Brittany, Shelly, and the ALL THE OTHER Baltimore Cheerleaders but, before the NEXT game, please take a healthy dose of our famous herbal supplement, called, “Shuthehellup,”  Ya Jagoff!!!!

Thanks to Honorary Jagoff Catcher and Twitter Follower, @RobertT1977  for making the suggestion of, “I feel the sense of urgency to make Phil Simms a jagoff.”

All three will be getting one of our SWANKY “Don’t Be A Jagoff” T-shirts featured HERE!