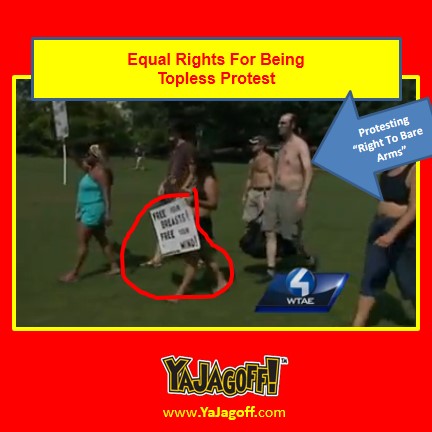 Just in case you missed this, members of the “Go Topless Group” had a protest in Downtown Pittsburgh.

Monday marks the 93rd anniversary of women gaining the right to vote in the U.S., but protesters said women are still not treated equally.

So basically, this group believes that the priority in the great equal rights gap between men and women is, women should be permitted to walk around in public topless.  This is like a mini-bike and buying a hot tub…. it seems to be such a FANTASTIC idea at the time but… over time… you realize… WHAT IN THEEEEEEEEEEEEEEEEE HELL was I thinking?  Especially when you catch a glimpse of the older topless ladies that look like they have 2 old tube socks full of sand hanging from their clavicles.

This protest was supposed to basically go from the old Hilton-now-the-Wyndham hotel ACROSS THE STREET FROM THE POINT.. to…. THE POINT!!!!  If you are not familiar with the geography, it LITERALLY is right across the street!  (Me thinks that the organizers are trainees and interns of those who designed the North Shore Subway extension!)

And thank GAWD it was a short walk because, at least the 5-7 people that showed up could ALMOST stretch themselves in a chain across a the street, in front of the hotel, but only if they streeeeeeeeeeeeeeetched and touched finger tips!  So not much of a civil disobedience protest.

But no worries!  We have a new protest of our own!  And most of those in Point State Park that day agree…it’s a protest against the lanky, bald guy in the pic above.  And, no, it is NOT a protest of the right to BARE arms.  (I don’t even think those ARE arms.  He’s a seamstress and those are thread samples hanging from his shoulders.)

Hey Wilbur Milktoast…. because of this picture, we now have over 2,000 volunteers ready to protest that EVERYONE keep their shirts on and, as an addendum in Part 4, Paragraph 1, Subsection 5.91 of the draft law, it requires all shirts to look like baggy hockey sweaters to cover up any sun-glow ARMS, Ya Jagoff!