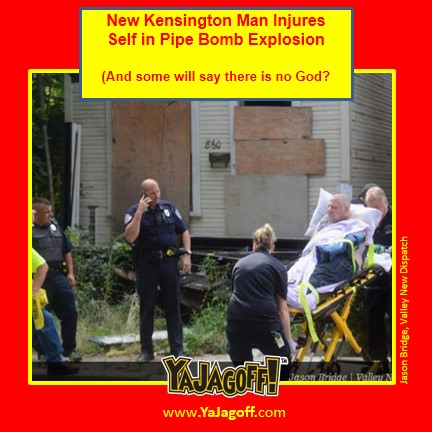 This story from the TribLive, New Kensington area was made just for us.  Quite honestly, we’re fairly sure that, because this story is sooooooooooooooo stupid, that this guy was doing this just to get a free “Don’t Be A Jagoff” t-shirt!

Here’s the first line of the story in the Trib:

A New Kensington man, Greg Domanski, injured himself Thursday morning when he allegedly set off a pipe bomb at the house next to his on Seventh Street.

Seriously… he made a pipe bomb and then tried to set it off AT THE HOUSE NEXT TO HIS which… if you read the Trib story, you will see that his house was only a few feet.. yes FEET.. from the house he was trying to blow up.

But it gets better… when the thing went off, he got hit!!!  Kinda like throwing darts and forgetting to leave go of the DART, huh??  LOL!!!!!

Hey there Greggy… we think you forgot to print out a couple of the “how to blow some stuff up with a pipe bomb” blog post you were referencing!!!  The part where you are supposed to put the pipe bomb somewhere NOT near you own house is probably in a foot note somewhere.

The only thing that would have made this story better is, if, when you were trying to place the pipe bomb on the house next to your house, you would have had to use your two hands for something which would have forced you to hold that pipe bomb between your KNEES!!!!  BOOM!!!!

And then when someone testifies at your hearing, on your behalf, and they start with “That guy’s NUTS….” then we could stand up and respond…”Were found 4 blocks away!”

Greggy-boy, ya might want to stick with scrapbooking pictures of your enemies. It’s a lot easier on the fingers, Ya Jagoff!!!!

Thanks to Shelly Rae from Twitter for letting me know about this and being the Honorary Jagoff Catcher for today.