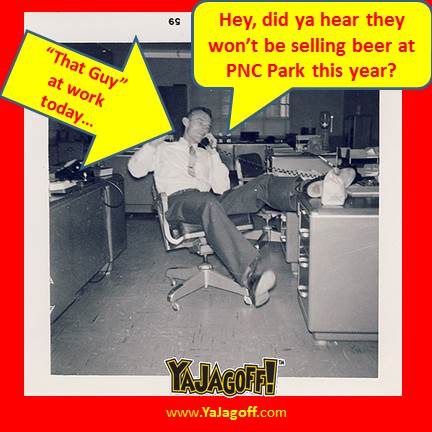 The Pittsburgh Pirates lost the home opener yesterday.  Not sure we planned on that but, what you CAN plan on is….when the Pirates DO lose the opener, there will be someone at work at the bus stop or on email that says,

Hey.. did ya hear they won’t be selling beer at Forbes Field Three Rivers Stadium PNC Park this year?

You, caught off guard say, “No really?”

Thennnnnnnnnnnnnnnn “That Guy” responds with, “Yeah… they lost the OPENER!!!!!!!”

That joke is as old as the camera the fake black-and-white photo above was taken with OR as old as the Pirates losing streak.  And by the way, they have beer taps and cans at PNC Park aaaaaaaaaaaaand, even more, NOBODY uses an opener any more so take off your 1970’s pants and your Bubby Brister team jersey and go get some work done on your Commodore 64 computer, YA JAGOFF!!!