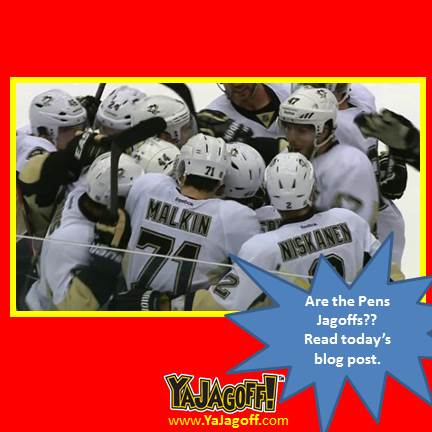 As we have said before and, as anyone from Pittsburgh knows, the word Jagoff can be confusing to those not from here.

It’s a term of endearment when we want it to be, “Oh my God! How in the hell have you been, Ya Jagoff?”

It’s a term of astonishment to someone you love, “You scared the @#$% outta me, Ya Jagoff!”

It’s also a phrase of frustration and anger, “You should shut up, Ya Jagoff!”

Given that, let’s talk about our Pittsburgh Penguins. Seriously, it took us 6 games to beat the Islanders? Do you know how many of us had puke in the back of our throats and acid reflux over these 6 games? And do you realize how much food was wasted watching these games because because we were literally in a panic?

For me, it was like golf… tension was soooooooooooooo high that some of us couldn’t even enjoy a beer during the games.. we were guzzling Pepto Bylsma.. I mean.. Pepto Bismol!!

OK.. rant over… thanks for beating the Islanders BEFORE causing a game 7 on Mother’s Day for crissakes! It could have been ugly telling Mom that she wasn’t going to be the focus of today!

So let’s get into Ottawa, give Sergei Gonchar one of those, “How in the hell have you been, Ya Jagoff?” lines. Give the Ottawa Senators owner and part-time CSI Agent, Eugene Melnyk, “You should shut up, Ya Jagoff!” salutation. And then let’s skate like a bunch of 4-games-benched Tyler Kennedies and get out of this series in 5 games, ’cause, with that Islander’s series, “You scared the @#$% outta me, Ya Jagoffs!”