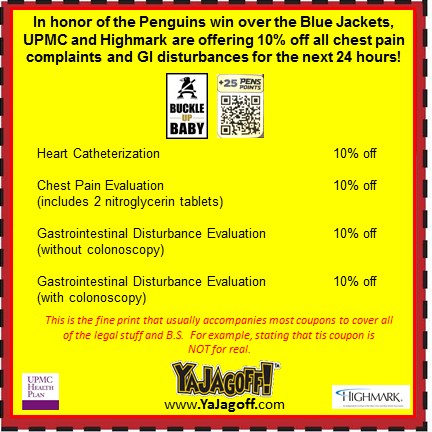 We all know that the bad situations create strange bed fellows.  Sometimes out of adversity comes opportunity.

Last night, during the third period of the Penguins/Blue Jackets game, when the Pens were very close to blowing a 4-0 lead, I received official word from the Vatican that they were permitting swearing and temper tantrums until the end of the game.

And due to the stress of the third period, Highmark and UPMC have decided to jump in and offer assistance to the community. You have 24-hours to redeem the above coupon at any facility.

In the meantime, Let’s Go Pens… and I mean it.. like, LET’S GO… stop playing like that Ya Jagoffs!!