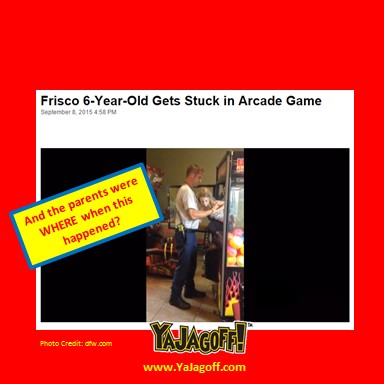 I realize that this story did NOT happen in Pittsburgh but, it is worth posting.  But, it sure points out the question of “Who was watching the kids?”

In a Frisco, Texas CiCi Pizza arcade, a little girl wanted to win a ball for her sister from one of those crane games.  Ya know, the ones where you have to control the crane back and forth, side to side, and then eventually drop the crane to pick up a stuff animal, ball or whatever prize. This little girl wanted a ball sooooooo bad, that she figured out how to crawl up into the game and grab one.  But, ooopsies, she didn’t know how to get out!  So the fire department was called to take apart the game and get the girl out.

If you watch the video of the story, the girls are cute.  The one sister admits that this may have been a bit of a dare.  And then the mother talks about how the girls… well.. here’s the quote:

“In her world, there are no challenges,” admits her Mom, Cecilia Green, “if there’s a boundary, they’re meant for other kids. Not for her.”

Not faulting the kids here.  Faulting the parents.  If I had been a reporter for this story I would have asked what the parents were doing WHILE THEIR KID WAS CLIMBING INTO AN ARCADE GAME…on the phone chatting, texting, searching for Group-on, trying to figure out the fascination with SnapChat while “the kids were being kids?”  I mean, how long do you actually have to NOT be paying attention to your kid in a public place in order to allow her time to climb into hatch and up into a crane game, YaJagoffs???