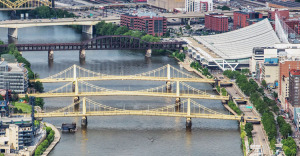 Allegheny County and the City of Pittsburgh have teamed up to ask for votes on what color to paint the Pittsburgh “Sister Bridges.”  Someone had the bright idea to paint each one a different color.  Things got a little crazy…. I mean like a room full of nuns watching a Tosh 2.0 live stand up act kind of crazy.

An online poll was started and you can see in the results, keeping them Aztec Yellow is the overwhelming sentiment.

But don’t leave it up to just the average people who still can’t let got of their Bradshaw shirts for Sunday mass.  We went to experts. People that have experience in this stuff…. moms of triplets.  Should the 3 “Sister Bridges” be dressed individually or the same.  And here are what the experts say (not necessarily about bridges but somehow extrapolated to apply to bridge painting.)

Extrapolation: we can buy lots of Aztec Yellow paint cheaper than if we bought 3 separate colors

I dress my boys in similar clothes (different colors but same style) but I dress them alike sometimes too. Like when I find something that is so cute but there isn’t something similar and I don’t want to dress one in cuter clothes than the other.

Extrapolation: So completely disregard when she mentions the “different colors/same style” thing.  What is important is that she does not want one to appear more cute than the other.  I guarantee, if the bridges were to be 3 different colors, we will be paying for a bridge-whisperer in 15-20 years for at least 2 of them.  If you want to give them a little flair to let them have their independence, let one have the Locks of Love, one have a bike lane and whatever.. you get the point. 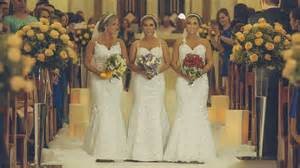 These Brazilian triplets got married on the same day in the same dress with the same hairstyle at the same time.  Not to be completely chauvinist but, have you ever seen a girl’s reaction when another girl at party has the same dress on?  It’s like, “hey mom, since you won the lottery and we USUALLY play together but I was a little short on cash the day you bought the last round of tickets so why can’t I share in the winnings?” kind of ugly.

Extrapolation: Well, these ladies dressed alike because they knew it was going to make for great publicity and internet pictures.  Ya can’t argue with that mentality… especially 3 women agreeing to be dressed in the same thing for one of the most important days of their lives.

So there ya have it.  I say the bridges stay Aztec Yellow and that is based on relatively unscientific, extrapolated and partially made up research to make my point.

Aztec Yellow it is, Ya Jagoffs.