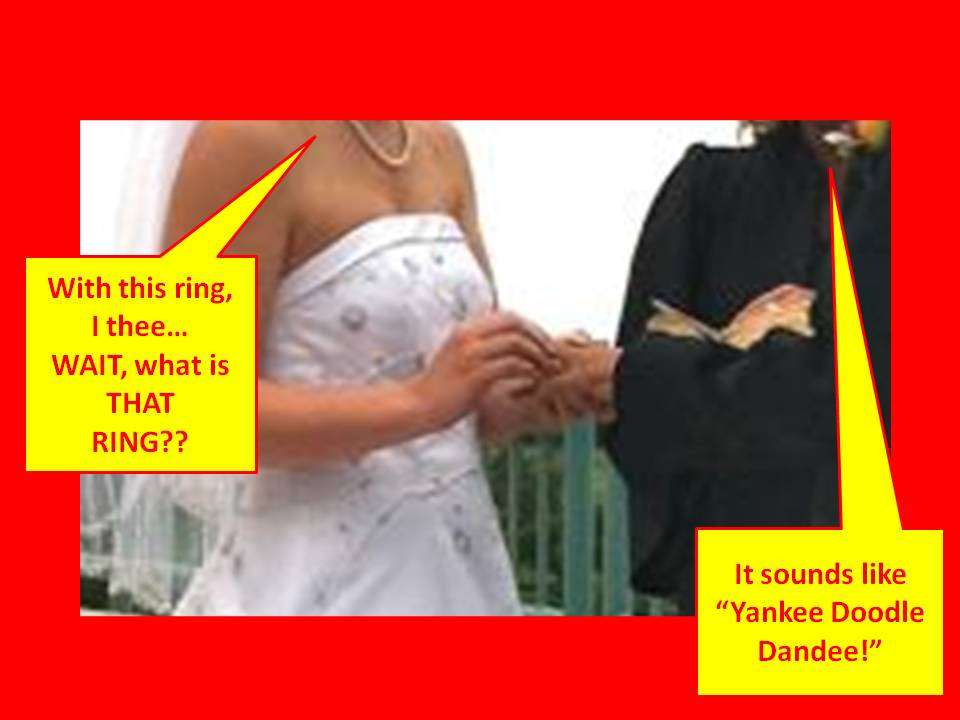 When you think of it, there is soooooo much potential for somone to catch a wedding Jagoff in action.

*   The Best Man who forgets the rings.

*   The Maid of Honor who passes out during the vows.

*   Ex-partners that show up un-announced.

*   Guests that place a wrapped EMPTY box on the gift table and then proudly take two passes through the rigatoni, chicken and salad buffet then make 3 trips to the cookie table.

*   Your Uncle Stush who accidentally hip-checks your Aunt Kitty into the bridal table because alcohol has given him some “dancing legs” and he doesn’t REALLY know all the steps to the electric slide.

Seems that the beautiful, young, loving couple above were involved in their wedding ceremony when, not once, NOT TWICE, but THREE SEPARATE TIMES some guy’s cell phone rang to the tune of “Yankee Doodle Dandee!”  (Not three rings for one phone call.  Three separate phone calls).

Now there ain’t ONE of us that can say our cell phone hasn’t embarrassed us at least once.  Let he without cellphone embarrassment cast the first phone!

But to NOT BE A CERTIFIED ON-CALL TRANSPLANT SURGEON and have your cell phone go off 3 separate times during the same wedding without you turning it down, turning it off or SMASHING IT into the floor with your heel, deserves SOME type of recognition – and this person ALMOST got it AT the wedding from bride and groom themselves.  But NO!  This young couple made one of the best decisions they could have so early on in their marriage – – they continued on with their vows and then calmly contacted US to call attention to this matter.

Hey “Cellphone Bill” (Get it?  We called him Bill!), you should feel pretty lucky that the Groom didn’t stuff your cell phone into a place where the camera could’ve told  us whether or not you have rectal polyps!  But he and his bride have ONE simple request before you attend your next wedding:  please download “Ave Maria” “Here Comes The Bride” or at least church bells for your ringtone.  (We’re all betting that you have one of those silly “La Cucaracha” horns on your ’73 Chevy Nova too!)  And, by the way, the bride and groom REALLY appreciate the thoughtful, everlasting gift you gave them – – your “Yankee Doodle Dandee” ring tone blasting over their vows on the wedding video, Ya Jagoff!!!

Make sure you go get one of our “Don’t Be A Jagoff” T-shirts RIGHT NOW!!!!  CLICK HERE!