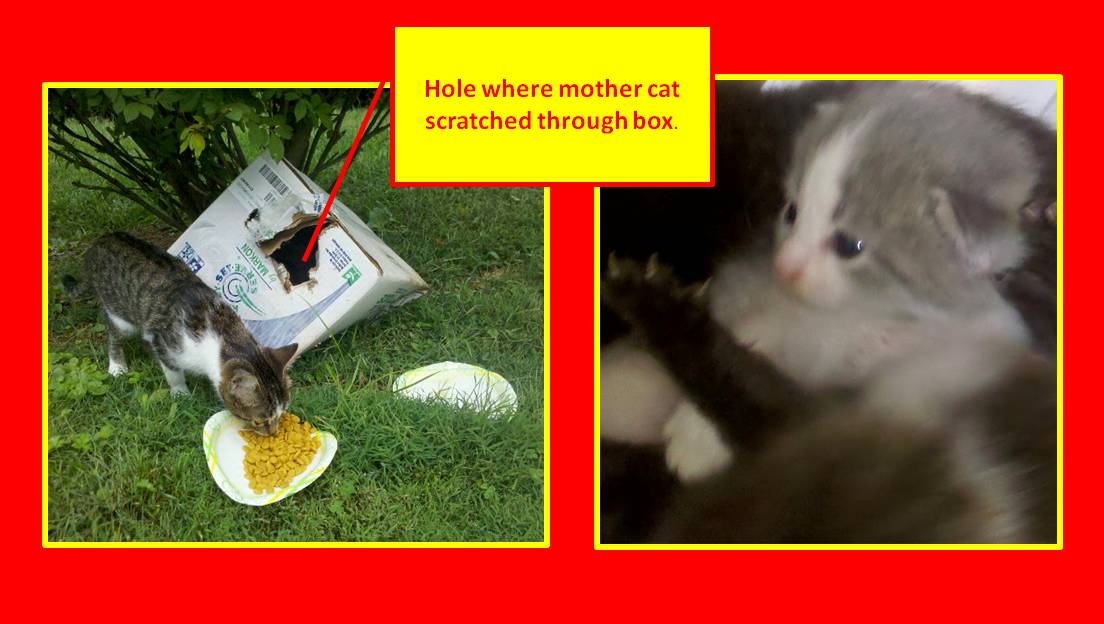 Say what you want about cats – love ’em or hate ’em – they are still living creatures and tossing them away like an old cigarette butt or empty Iron City can is ridiculous!

We received the pictures above with an e-mail.  The summary is:

I was out walking my dog on Mt. Royal Boulevard and came accross a mother and 4 kittens.  They had been thrown in a box that was taped shut and the mama had scratched her way out of the box.  The kittens were only a couple of weeks old.

SHEEEESH!!!  We STILL have Catholic-guilt-nightmares today from when we were kids and took the lights off of lightning bugs to make rings on our fingers!!!  Cannot imagine what kind of dark soul would sit there and deliberately tape this box shut instead of just letting the cats run free and fend for themselves – no matter HOW MUCH you hate cats or any other living creature.

Chapter 1:  The feline fiend is caught

Chapter 3:  You are then taped into your own cardboard box –  exposing only your toe nails and finger nails

Chapter 4:  You are DE-CLAWED without sedation (Yep, we REALLY liked that movie, “Law Abiding Citizen”)

Chapter 5:  92 cats (92 for James Harrison type of intensity) get to repeatedly jab their claws into your cuticles and those recessed corners of your exposed nail beds – you know,  those little groves like where you get ingrown toe nails?

Chapter 6:  We call the police and have them haul your scratch-post-ass off to jail.  (You see, because we are humans, WE would NOT actually just leave you on the side of the road to die!

Sure, it may sound like we are highly trained, ruthless sado masochists experts from the Guantanamo Bay, but we’re not…..we’re just people that did 8 years of hard time in a Catholic School with nuns.  So, Mr. or Mrs. Cat-boxer,  you better hope a starving vulture finds you before any of the rest of us do, YA JAGOFF!!

Thanks to our Honorary Jagoff Catcher and Facebook Follower Denis Lohr of PetSitPgh, LLC for today’s post!

Hey, you know we are selling our t-shirts to raise money for Breast Cancer Research – CLICK HERE for details.  But ALSO, Leslie Mehalek, of Nana Cat’s Soy Candles fame, is willing to give us 10% of all sales toward our fundraising if you contact her and say (or write), “I’d like to buy a candle, YA JAGOFF!”