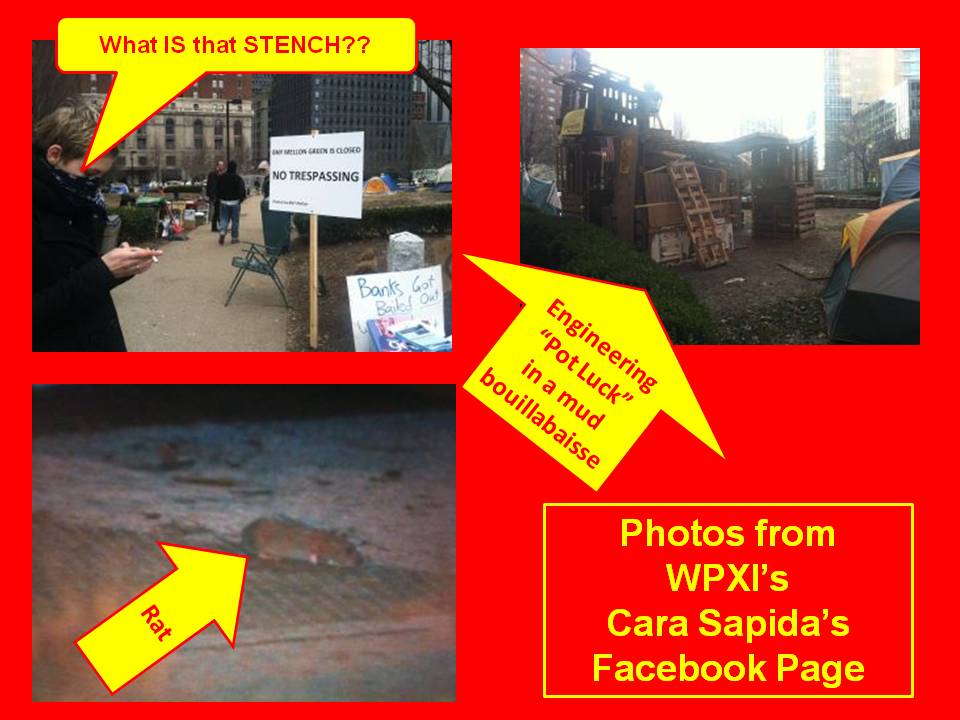 Well, it’s taken THIS long for us to finally comment on the Occupy thing.

The area pictured above had been previously referred to as Mellon Green for good reason.  It WAS a quaint “green space” next to the Mellon Tower.  Now, as many of the local news stories and reporters, like Cara Sapida, have shown, the property is nothing but a pile of muck, including garbage, rats and human waste, thanks to the Occupy movement.. some of whom aren’t even from our area.

Once again, we respect anyone’s right to protest against “the man” “the woman” “the half-man” “the wolfman” “the boggieman.”  But how about a little self respect and, like your grandma probably used to tell ya, CLEAN UP AFTER YOURSELF.

Do you realize that any good that you might have done with your protesting is zeroed out by the disrespectful MESS you left behind.  If you’re intentions were TRULY good, you would have cleaned up after yourselves.

Well, the good news is, the Occupy Pittsburgh protest is pretty much over.  It’s now time for you all to either move to the south and find something else to protest OR, here’s a good idea, GET A JOB SO THAT YOU CAN PAY TAXES…..taxes that will have to be used to pay for the  public safety costs accumulated in PROTECTING your right to protest as well as taxes that will be used to CLEAN UP YOUR MESS, Ya Jagoffs!!!

NOTE:  Do NOT leave a comment saying that we don’t understand “the man.”  We do!   And whether or not we agree or disagree with your protest is irrelevant.  You’re STILL a bunch of Jagoffs for leaving this mess for someone else to clean up.

NOTE, NOTE:  By the way, there are plenty of 25-30 year old entrepreneurs that have chosen to “protest” by starting their own businesses.  Some of them might even give you a job if you shower.