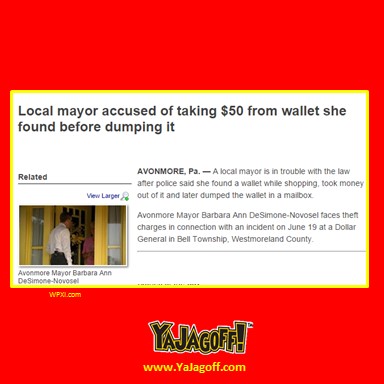 Another politician I-didn’t-do-it-I-swear-it-wasn’t-me-I-have-no-doubt-that-I-will-be-vindicated-once-all-of-the-facts-come-out-OK-maybe-it-was-me-but-not-100%-sure-Oh-WAIT-you-have-me-on-camera-so-I’m-gonna-have-to-be-quiet-and-speak-to-my-attorney kind of stories!  All over fifty bucks…merely one-night of bingo money for most 72-year old women!

Avonmore Mayor Barbara Ann DeSimone-Novosel ALLEGEDLY goes to the local target and finds a wallet in one of the carts.  (This is even more exciting to her, obviously, than getting the Aldi carts to pop out an extra quarter).

She’s seen on camera covering up the wallet.

Eventually the wallet is no longer there.

4 days later the wallet turns up in a local mailbox.. (minus the $50 that was in it)

And, like a little kid that knows that you saw him sneak a cookie but flat out denies, with the conviction of a cable television evangelist, that he ate the cookie… the Mayor says, (in her best Shaggy voice) “Wasn’t me!”

Here’s my political advice Mayor, come out TRUMP’n!  Stand in front of a press conference podium and just start belittling everyone who asks a question.  Tell them how rich you are from your previous week’s Instant Bingo and Lottery winnings so you don’t need that stinkin’ fifty bucks!

Welp.. Mayor Babs, this doesn’t look to good.  Ya should have stuck with just going to the local bingo and doing your voodoo-wammies on the 49 cards on the people beside you or putting your special hex on their lucky green dobber.  THAT kind of cheating is LEGAL even when you’re trying to cheat the local church, volunteer fire hall or VFW.

In the meantime, thanks for the blog post material. And good luck finding anyone in the municipal building or your neighborhood willing to pitch in with ya on one of those office MegaMillion or PowerBall lottery office pools, Ya… (wow… calling a 72 year old lady that?..might this be difficult?….NOPE!) Ya Jagoff!

AND THE WINNER IS….

Today is when we announce the winner of the 2 VIP passes to the McKees Rocks “Feastival” this Saturday.

VIP Passes are good for age 21+ only

Orso, email us at yajagoff (at) version (dot) net and use Subject Line Feastival 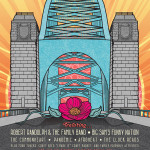