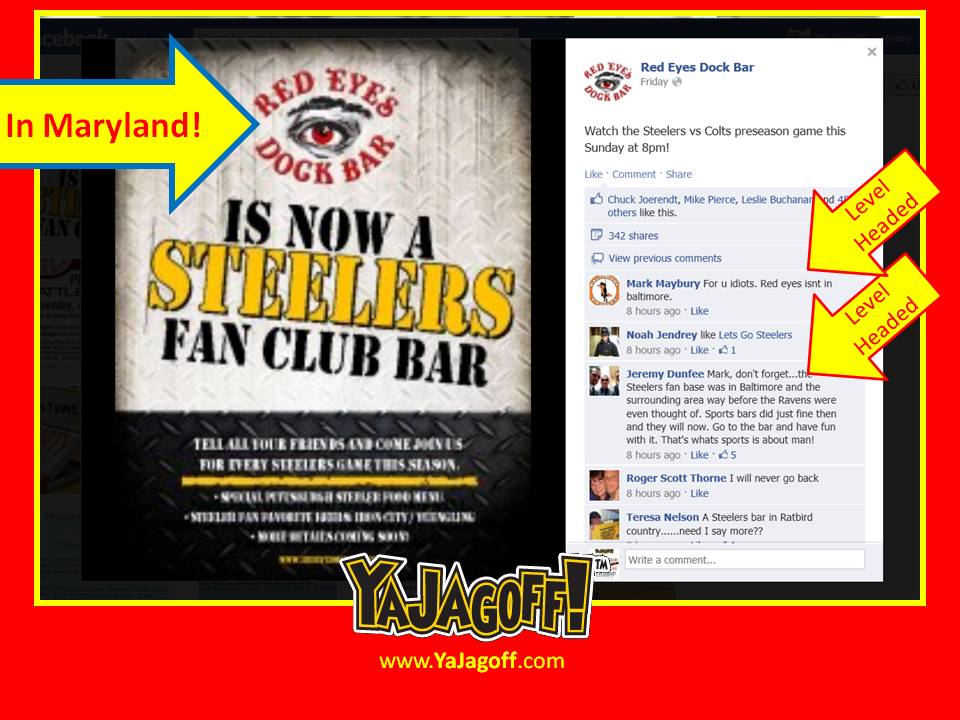 But, late last night was “Breaking Jagoff News!”  On our Facebook page, someone posted about a bar in Grasonville, MD that recently became a Steelers Fan Bar.  After trying to support the Baltimore market as a haven for Ravens fans and basically getting very little business (i.e. support to stay in business), the bar became a Steelers Bar.

Here’s part of the message that Red Eyes Dock Bar posted on their Facebook page:

Red Eye’s Dock Bar takes great pride in being an establishment where everyone is welcome. Our guests come from several regions including MD, PA, VA, NJ, DC, and more… Over the past three years we have tried to establish Red Eye’s as a place where NFL fans could come to watch the games during football season…We promoted and publicized it yet had very little turn out. We were forced to limit our days and hours of operation because of the lack of turn out. When we were approached to become a Steeler Bar we saw absolutely no reason not to accommodate them based on the lack of interest and support from other teams’ fans.. Red Eye’s Dock Bar will always be a place where everyone is welcome regardless of what team you are rooting for.

After that post, over 600 nasty comments were posted about the bar and it’s owners.  Here’s just a sample: 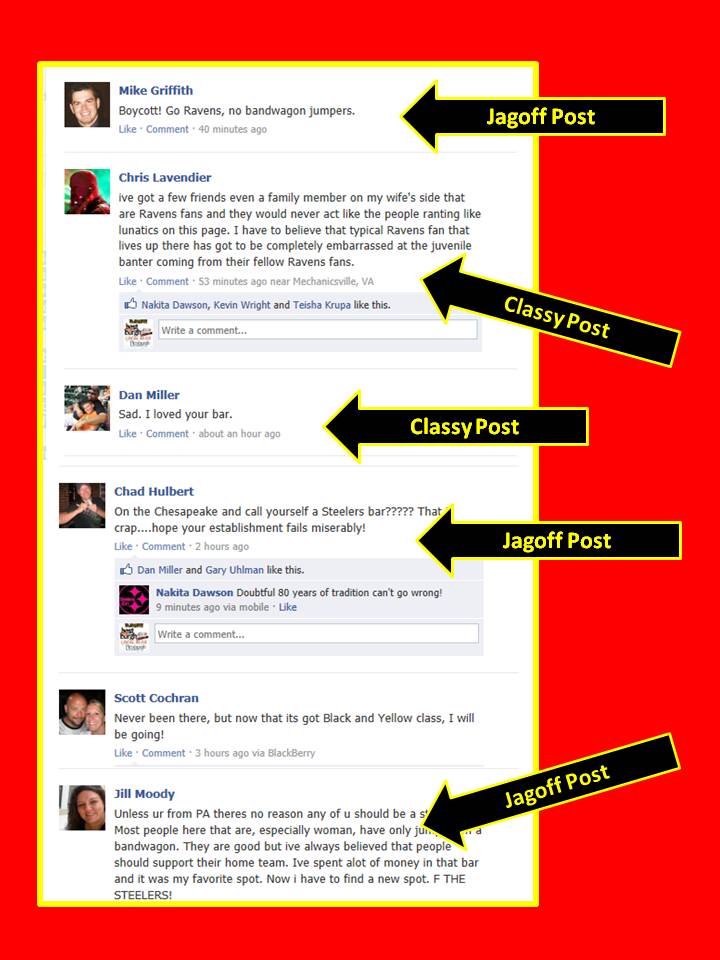 Most of the comments were pretty nasty, swearing and calling for a boycott of the bar.  There’s even a new Facebook page about “Boycott the Red Eye Bar!” (We refuse to post the link).

And like whiny first-graders, the Ravens fans come up with, “well you wouldn’t want a Ravens Bar in Pittsburgh…mlah…mlah…mlahhh!”  LOL.. those are BRILLIANT comebacks. Where in the world are the “You’re mom” comebacks from 4th grade era ???

To the folks at the Red Eye Dock Bar, good luck!

To the classy Ravens fans who are embarrassed by the actions of some others, stay strong.

One note Ravens-Mensa club members, a boycott is when a whole bunch of you STOP going to the bar.  How can you boycott a place most of you didn’t go to ALREADY???

Now how cool would it have been for some of you to simply organize a “RAVEN-RAVE” where hundreds of Baltimore fans show up in Ravens gear and eat and drink to show the bar how much you will support them???

To the “let’s boycott” ring-leaders, keep your money you still have from your first communion and keep posting nasty things.  In the meantime, Steelers fans will help the folks at Red Eye Bar, Ya Jagoffs!!!

Thanks to Facebook Follower Gail Blaker for the info and for being our Honorary Jagoff Catcher today!!!

Those if you who follow us know that we NEVER advocate a boycott of anything!  So, here’s your challenge, be the first one to get a pic of yourself in one of our “Don’t Be A Jagoff” t-shirts, will get one of our chairs, one of our umbrellas and one of our travel mugs!!!

Click the Pic below if you need to get a shirt!