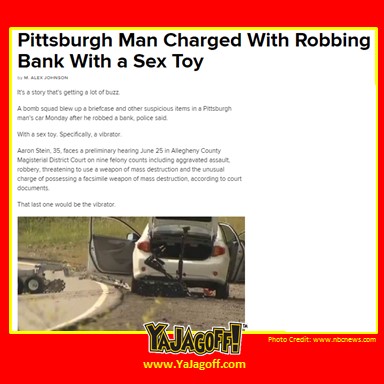 If you’re new here, we post stories of Pittsburghers that are embarrassing the rest of us.  This is that.

Below are portions of the article about this story on the NBC News.com website along with my commentary.

A bomb squad blew up a briefcase and other suspicious items in a Pittsburgh man’s car Monday after he robbed a bank, police said.

Word has it he hesitated on the bank robbery 3 times before he executed it.  He kept thinking his phone was vibrating every time he started the process and stopped to see who was texting him.

The robber drove off in a white Toyota, which was pulled over on a ramp to northbound Interstate 79 by Robinson Township police, Sumpter said.

A bomb squad dog checked the device and a briefcase that officers found in the car. Both were detonated as a precaution, police said.