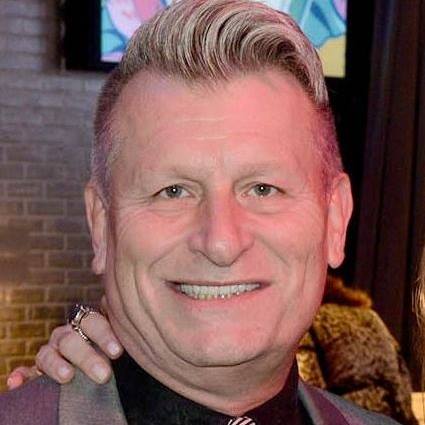 Dedicated to everyone who leaves the safety of their homes and the arms of their loved ones to selflessly care for the needs of the entire world.

This picture is the beginning of an everchanging, ongoing story. 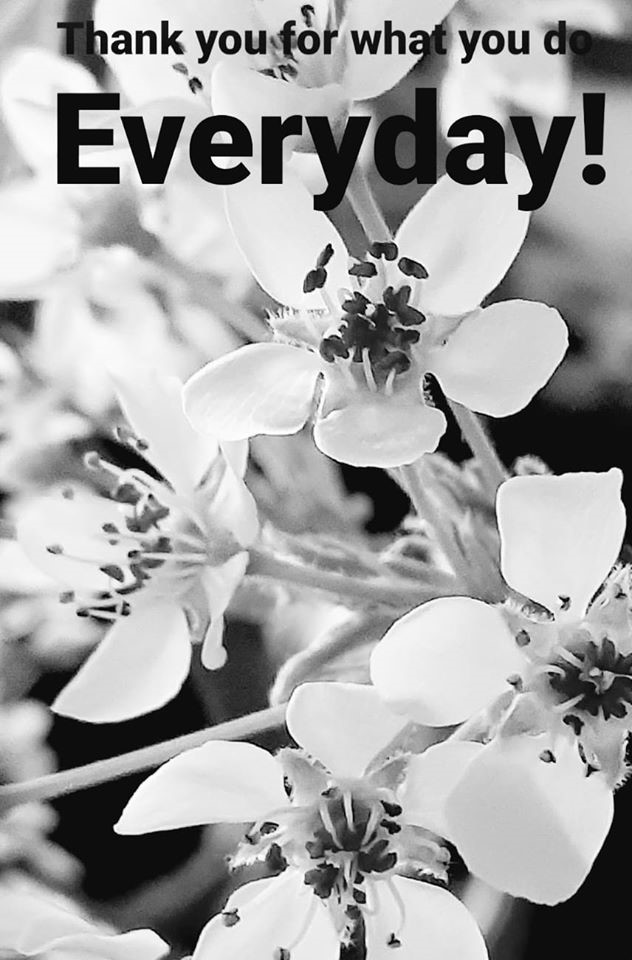 Two nurses at Allegheny General Hospital, Dana and Marci, both park in the off-street parking area at the rear of the property. I’ve grown very fond of these two remarkable people.

than earlier indications. The virus had reached Pittsburgh with the first two reported cases on March 14, 2020.  A little over a week later, March 23, 2020 was a cold rainy morning.  Sitting in my parlor, I am glued to the television watching the dreadful news that the virus had now affected 264 Pittsburghers. Just then I happened to see Dana pull into the lot. Immediately it hit me directly in the heart that this woman was about to walk into a very dangerous place to do the job that is her calling. I wanted to do something to let her know how much I admired her for her compassion and dedication. I found the above picture, which I took, printed out two copies in black and white. (My printer is out of colored ink) I colored in a few of the flower pedals with markers, wrote a phrase inside, stuck it in a plastic bag and placed it under her windshield wiper.  She followed up with a very sweet message thanking me for the card. The following day I was able to deliver Marci’s.  Her message to me was so poignant as she wrote, “I will see you when this slows down. I don’t want to see you in case I’m a carrier.” It was mentally devastating to really, really understand just how serious this was.

After seeing how much it meant to Marci and Dana that I had acknowledged their sacrifices, I was torn as what I could do to reach the people who work at AGH.  This consumed me. I was compelled to do something to show all the workers at AGH that they were appreciated. The morning of March 26, 2020, I awoke with clear mission.  I found a roll of brown shipping paper, a can of interior house paint and an old brush.

This was the result: 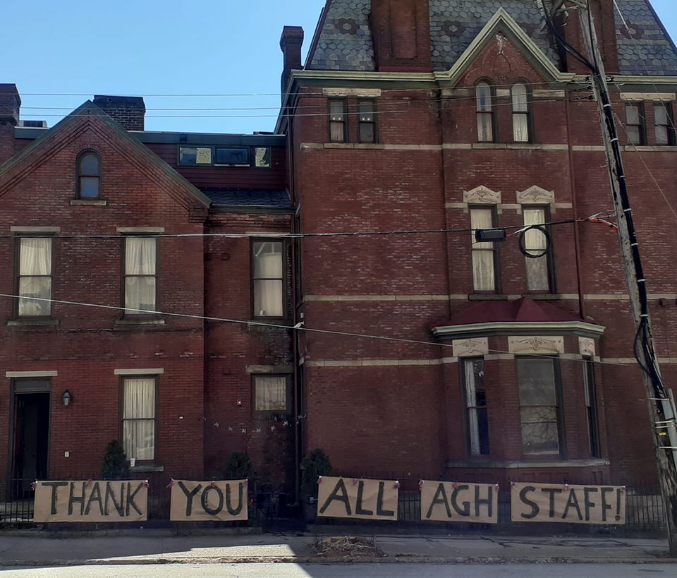 That entire day I received so many messages from workers from the hospital. Words of appreciation, thank yous  and kindness that touched me deeply. Acknowledgements came pouring in through Facebook, messages on my phone and phone calls. I was floored. I was not expecting the outpouring of gratitude, the emotion, the tears quite frankly. The wind was not kind this day. I had to take the sign down after an hour as it was getting damaged.  Ashlee Green from the Northside Chronicle had seen the post by 3:30 the same day. I received a message from her asking if they could use the picture that I had posted for the The Northside Chronicle.  thenorthsidechronicle.com.

A couple days later, March 30, 2020, I decided to ask people to join me at my house for a pep rally for the staff at AGH.  12 brave friends and souls showed up.  We stood the recommended 6 feet apart.  A few people brought signs that they had made.  It was windy and cold. The original sign was ruined.   After about an hour we ended the rally.  I wasn’t sure that anyone had even seen us.  It didn’t matter as long as even one person realized our presence and knew that people were aware of their sacrifices. 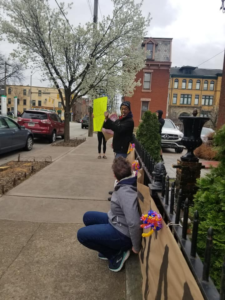 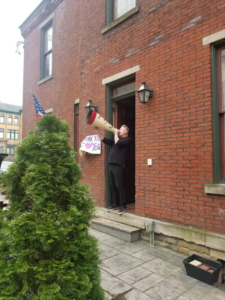 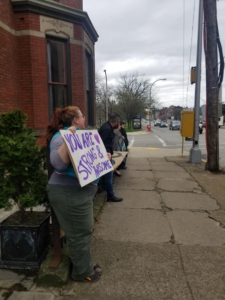 After losing the large sign to the wind, I decided that I had to add another message of encouragement as the virus situation grew. On the morning April 1st this sign was added to the outside wall and on April 2nd it was lighted so that all the staff leaving or arriving

during the night would see my message. April 3, 2020, I added the #AGHStrong and the #StayHomeTeam signs on the exterior of the building.

By the end of the day I was getting messages that WTAE TV had run a piece on my signs and ran it several in several slots for 2 days.

On April 4, 2020 the Northside Chronicle ran this picture and caption. 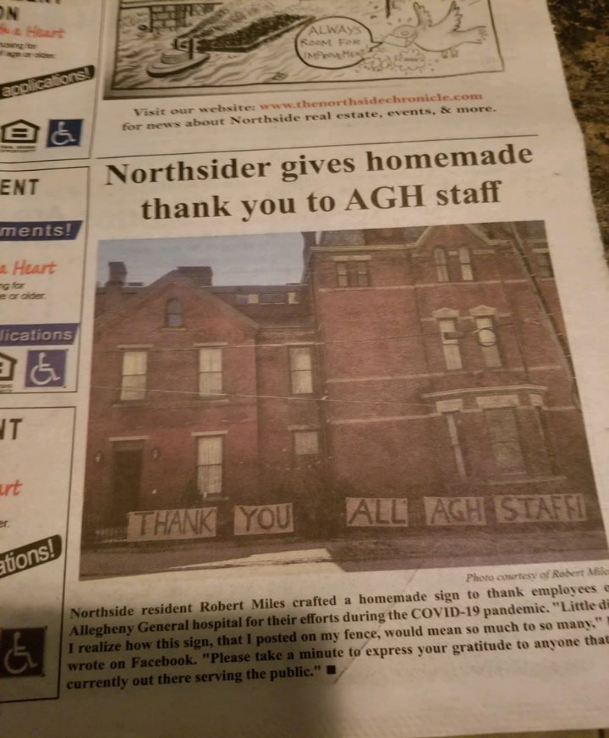 On April 5, 2020 I was outside in the courtyard gardening when I noticed the WTAE TV van driving slowly past the house. The driver asked if I made the signs, I said that I had.  He asked if I wanted to share the story. “Absolutely!” I replied.  I spent the next ½ hour talking to him, sharing the story of the signs, their meaning and why.  Later that day the piece aired on WTAE during the evening news coverage. 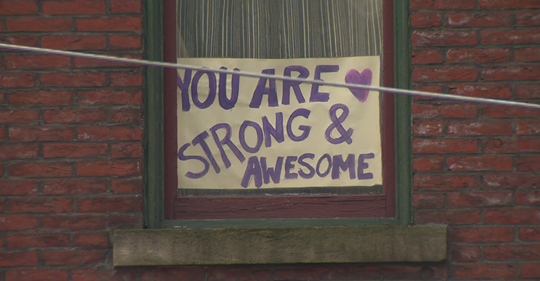 Some of the signs are now gone.  Wind and rain damage caused the loss of a few of the pages.  Others now live in the windows of my home.  The signs will stay on display and I will continue to create new signs of hope and inspiration to the brave people working the front lines at Allegheny General and everywhere.  My heart goes out to each and every one of them as I see them arrive daily for their shift. I am aware of what is happening in that building and the seriousness of this virus.

This story is that none of this has anything to do with me personally.  With the sincerest of intention, these signs were created, displayed, posted and unknowingly necessary.  There was such an outpouring of messages from not only the hospital staff but from others who go to work every day. It became clear that people need to know how much they are appreciated. Even if you think you can do nothing, grab a piece of paper, make a card and send it to a hospital addressed to just Doctor or Nurse. They will get it.  Make a sign to put in your window at home or in your car. You never know when someone on their way to work at a very dangerous job sees your proclamation of love. They will smile, feeling joy, knowing that someone has noticed and appreciates their commitment, compassion and humanity.