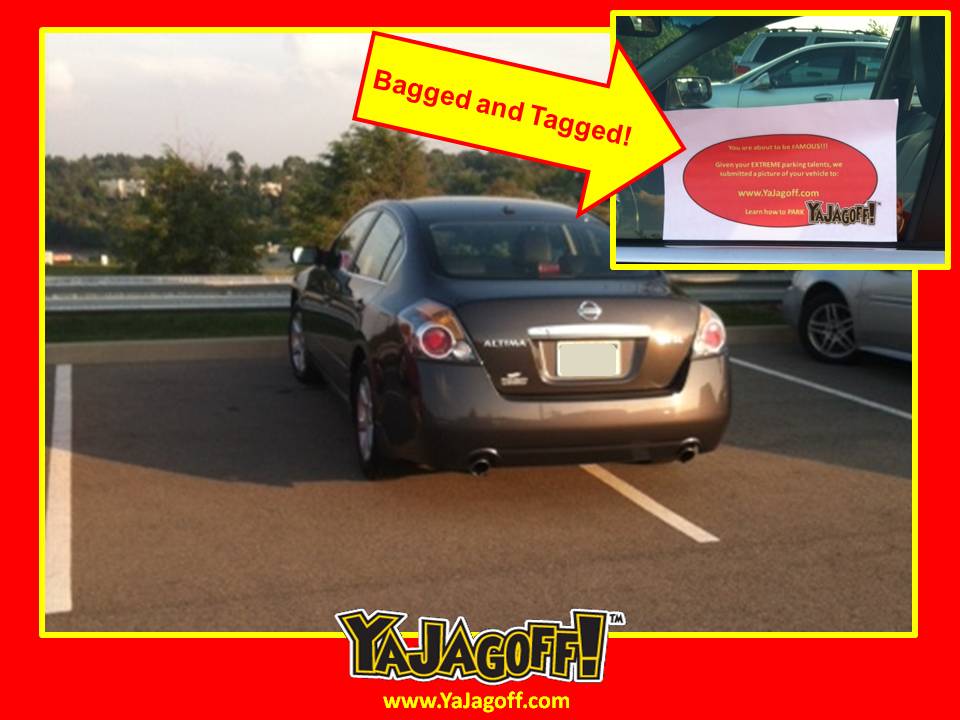 We had a completely different post set for today.  But, out of no where came an email.  And it contained, not just photo of a bad parking job, but a photo of  bad parking job CALLED OUT by one of our printable notes!!! (We’re soooo excited!!)  This horrendous parking job was found at the Cinemark parking lot out near Robinson Township, PA.

But wait!!!  Remember, we try to be about looking for solutions vs. placing blame.  You see, if we wanted to, we would actually place blame on the incompetency of the line painters for putting the lines in the wrong place and then congratulate the driver of the car for proving the point and making the line painters look bad!!

So as not to place blame on the driver without getting the real story, we sent our “Hard-Hitting” Jagoff Investigative Reporter team out to look at this.  And after they were done eating at the Settler’s Ridge Market Place and getting cheap boxes of candy cigarettes and Boston Baked Beans and purchasing nostalgic t-shirts at Five Below, our investigators found out this poor driver has a major vision problem.

You see, this driver, pulled into this space and, on the way to the movies.  As they were entering the theater lobby, they walked right into the post between the two entry doors.  Then, when standing in line to purchase their tickets, was found straddling the “form line here” rope, and when they went to get a fountain drink, ended up with a mix of Pepsi and Raspberry Iced Tea and a very wet hand because they couldn’t get the cup directly under one of the spouts and, finally, when they ultimately got into the theater, they ended up complaining to the Cinemark Manager about how sore the theater seats made the crack of their butt… only to realize they had actually watched the entire movie while unknowingly sitting on an ARMREST vs. an actual chair!!

So Cinemarker-Peter-Parker, we might actually hold a fundraiser to get you some cool frames at Pittsburgh’s best Eyetique!!